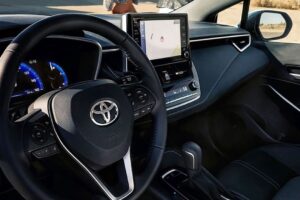 Instagram post from Toyota’s US division subtly hints at hot VW Golf GTI rival, which is likely to arrive in 2023 and use GR Yaris power

The first official hints at a Toyota GR Corolla hot hatch have dropped in a cryptic social media post – so subtle it went unnoticed for nearly a month.

The image, which was posted to Toyota USA’s Instagram account on October 26, appears to be an innocent press shot of the standard Corolla’s interior. However, users of Toyota enthusiast forums picked up on a number of details showing that it’s actually a teaser for the Gazoo Racing sub-brand’s second hot hatch.

Key details that nearly went unnoticed include a message on the instrument cluster saying “G:16” where the time would usually be shown. It is understood that this is a reference to the GR Yaris’s G16E-GTS engine code for its turbocharged three-cylinder unit.

As previously detailed by Auto Express, the GR Corolla – expected to go on sale in 2023 – is tipped to be powered by that same 1.6-litre petrol engine, which puts out 268bhp in the Japanese-market GR Yaris. That power figure is also hinted at in the Instagram post, which shows the numbers 2, 6 and 8 displayed on the Corolla’s climate control dials.

The biggest hint, however, is visible through the car’s passenger window in the image. It appears to be a prototype test mule for the GR Corolla, wearing the same camouflage pattern as worn by both the GR Yaris and GR86 during development. The shot is too far away to make out any detail, however.

The final clue is buried in the Corolla’s sat-nav, which shows the car next to a road named “GR Four”. That is Toyota’s moniker for its performance all-wheel drive system, again used on the GR Yaris. The set-up uses limited-slip differentials on both the front and rear axles, combining with an electronically controlled centre differential. Expect the GR Corolla to launch with a similar system if this teaser is anything to go by.

The only question mark is that the car in the image features an automatic gearbox. Auto Express understands that a European GR Corolla – if it came to the market – would come fitted with a six-speed manual gearbox, so it remains to be seen if this will be a US-only product.

The image is the first time Toyota has seemingly referenced the GR Corolla through official channels. However, the brand filed a name trademark for ‘GR Corolla’ back in March 2020.