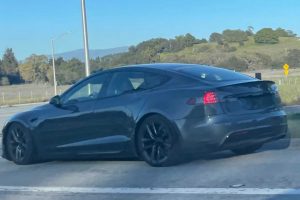 We finally see the Plaid badge.

There were more refreshed Tesla Model S sightings near the Fremont factory in California. This time around, a Model S was spotted with a Plaid badge and another with a yoke steering wheel. These sightings will happen more often since customer deliveries should begin soon.

The sightings, posted on Twitter by Zack @BLKMDL3, are quite special because we get to see the Plaid badge and the famous yoke steering wheel. The Plaid along with the Plaid+ are two new models for the refreshed Model S. The Plaid we see in the photos has three motors and 1,020 horsepower, allowing the electric sedan to hit 60 mph in under 2 seconds and run the quarter-mile in 9.23 seconds at 155 mph (according to Tesla). It will have a structural battery pack and use 4680 battery cells. The Plaid+ will have more power but won’t be available until mid-2022.

The yoke steering wheel, something normally found in race cars, is another very talked-about feature. At first, some thought it was a joke, but that’s not the case. It will be an option once approved by the feds. Without regulatory approval yet, Tesla will ship refreshed Model Ss to customers with a round steering wheel, and once approved by the NHTSA, Tesla will replace the round steering wheel with the yoke one for those who want it. There is still no word on how exactly the yoke steering wheel will work during daily driving. It works on race cars but it’s hard to imagine doing a tight three-point turn with one unless there is some kind of adaptive steering system.

When comparing the two Teslas, the Plaid model is clearly sportier-looking and has a large central air intake at the bottom of the front bumper. The refreshed Model S is supposed to be a little wider and it appears that way in the photos. There hasn’t been any confirmation from Tesla, but it appears the refreshed Model S should start hitting customer driveways next month or possibly in May.