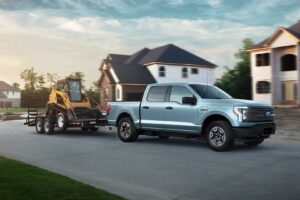 Ford CEO Jim Farley believes the new federal tax credits for electric vehicles created by the Inflation Reduction Act should have a “wide range of positive impacts” for the automaker, especially for its commercial vehicle division.

That’s because the Inflation Reduction Act will add a tax credit of up to $7,500 for commercial EVs weighing less than 14,000 pounds (6,350 kilograms). It will be available to city governments and other fleet operators, with no restrictions on battery sourcing or manufacturing—as opposed to passenger EVs, which are subject to a series of conditions.

Automotive News reports that Ford expects that 55 percent to 65 percent of its commercial customers will be able to claim that credit in 2023 on its F-150 Lightning Pro pickups and E-Transit vans.

“I think this will help our profitability quite a bit next year. Having almost 65 percent of our customers qualify, including local municipalities? It’s a game changer for our demand.”

Ford is already a segment leader in commercial vehicle sales in the US and created the Ford Pro unit last year to further develop that business. The E-Transit, for example, already owns 90 percent of the fledgling EV van segment, Ford says.

According to Farley, the addition of the commercial tax credit could increase demand from business owners who have been undecided about the switch to EVs. However, he also sees an inconvenient in that the upcoming credit may affect sales through November and December 2022 as a lot of customers “are going to wait until next year to order a Lightning Pro or an E-Transit.”

As for its electric passenger vehicles, Farley says the F-150 Lightning and Mustang Mach-E are currently eligible for a tax credit, but eligibility requirements change next year when new battery sourcing rules and other restrictions take effect.

“Next year, we believe we’ll meet the $3,750 critical materials credit requirement on certain Mustang Mach-E and Lightning models,” Farley said, without providing details. He added that in 2024, the rules will further restrict the credit.

The CEO said the largest impact to Ford could come from a new battery production tax credit of about $45 per kilowatt-hour starting next year. The automaker estimates a combined available tax credit of more than $7 billion from 2023 to 2026 with a “large step-up in annual credits” starting in 2027 as its joint-venture battery plants reach full production.