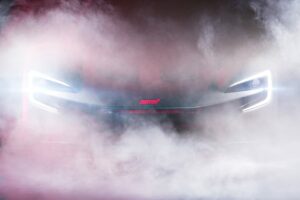 Later this week, Subaru will pull the sheet off its latest show car, the STI E-RA Concept. The company says it’s a research project that has been designed to gather experience and test the technologies that will be deployed in future carbon neutral areas of motorsport.

For the time being, the brand has only published this teaser image shrouded by a cloud of smoke, but we’re expecting Subaru to make more details available once the car in unveiled at the 2022 Tokyo Auto Salon.

Given Subaru’s short but decidedly eco-conscious brief, we’re expecting the E-RA Concept will feature some form of electric propulsion; it’s possible that the car’s motors and battery pack could be carried over from the brand’s recently launched Solterra SUV.

It’s also possible that Subaru will showcase some future gazing eco-technologies, such as recycled composite body panels which will help cut weight and make future eco racers more nimble on the track. The car in Subaru’s teaser image seems to have a textured matte finish that appears unlike steel, aluminium or even carbon fibre.

There’ll also be a few more cars making their debuts alongside the E-RA on Subaru’s show stand, chief of which will be special edition versions of the new WRX STI and Levorg STI, fitted with cherry red accents and a new performance exhaust system. The WRX will also feature a new carbon fibre rear spoiler.

Finally, Subaru will unveil a specially modified version of the second-generation BRZ, equipped with a host of STI performance parts. The race-winning BRZ GT300 Japanese Super GT track car will also be on display at the show.