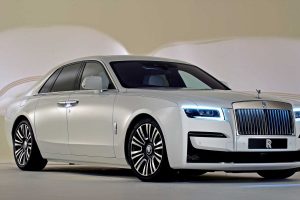 The new Rolls-Royce Ghost offers 563bhp from its 6.75-litre V12, new Adaptive Planar suspension and lots of attention to detail 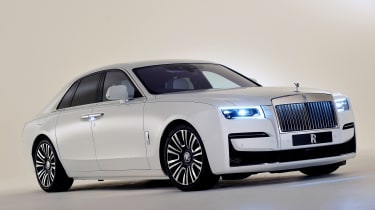 This is the all-new Rolls-Royce Ghost, the second generation of the British firm’s most successful ever model. Rolls says it launched the Ghost in 2009 in response to younger customers who wanted a model that was slightly ‘smaller’ and less ‘ostentatious’. It went on to become the biggest-selling model in the company’s 116-year history.

This new version is completely new from the ground up, switching to Rolls’ new aluminium space frame architecture that also underpins the latest Phantom and Cullinan SUV. Despite buyers’ initial wishes for a smaller model, the new Ghost is larger than the car it replaces. Overall length has grown by 89mm, now measuring 5,635mm, while its width has increased by 30mm to 1,978mm.

Only one engine option is available under the bonnet: a 563bhp 6.75-litre twin-turbo V12 unit that sits just behind the front axle for a perfect 50/50 weight distribution. As standard, the engine is paired with an eight-speed automatic gearbox and four-wheel drive, and develops 850Nm of torque; enough, says Rolls, to propel the 2,490kg Ghost from 0-62mph in 4.8 seconds.  Official fuel economy stands at 18.6mpg, with CO2 emissions of 347-358g/km.

The Ghost gets all-wheel steering for the first time, which is designed to help reduce the car’s turning circle and make it more manoeuvrable. To improve ride quality there’s also a new suspension set-up: the Planar Suspension System. It comprises an upper wishbone damper unit – the first of its kind – above the front suspension assembly to deliver an even smoother ride, Rolls claims. It works alongside cameras in the windscreen that read the road surface and adjust the suspension accordingly. 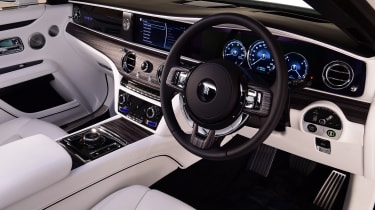 The doors on the Ghost are now fully automatic; buyers pull, hold and wait for the door to open, while a press of a button closes it once inside. More than 100kg of sound deadening has been added to the doors, roof, the double-glazed windows and inside the tyres to keep things hushed on the move. Refinement is at the heart of the new Ghost; the air-con ducting was even polished to reduce the noise it created.

Around 20 half hides are used to trim the cabin, although no two Ghosts should look the same thanks to the firm’s personalisation division.

Henry Cloke was tasked with leading the exterior design team on the all-new Ghost. We sat down with him to chat about his latest creation and what it means to him and his clients.

A:  “I think having the long bonnet and that stance, the proportions give it that flow and that dynamic. So it’s not really styled to look sporty in any kind of superfluous, sporty way, but it definitely looks like you would get in it and you might want to drive it.”

Q: What is your favourite part of the design? What do you look at and you just think, “That was me”?

A:  “For me, it’s the face of the car. We see the car as a clay model, and then as some prototypes; it’s actually quite a long time between. Then it almost comes off a truck fully finished where you suddenly see that face looking back at you that you sketched probably three or four years beforehand. I think that’s the bit that gets me. ”

Q:  How is the landscape of luxury shifting?

A:  “There are lots of people who actually want to come and really understand how their cars are made.”

Now read our review of the previous-generation Rolls-Royce Ghost here...