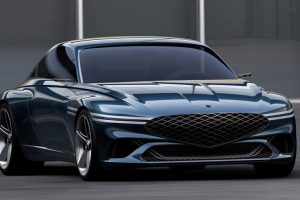 This is the new Genesis X concept. The Korean brand says it previews its vision of a sustainable pure-electric luxury grand tourer which could rival the likes of the BMW 8 Series and Lexus LC, at least in theory.

Genesis employed its new “Two Lines” design language on its new GT concept, which will soon appear on the firm’s production vehicles. Key features of the new styling theme can be seen on the concept’s narrow LED headlamps, slim tail lights and parallel courtesy lights around the charging socket.

The concept also features a stylised version of Genesis’s production radiator grille, with mesh that bears the same geometric G-Matrix pattern used on the GV70 luxury SUV. Also, even though it’s not technically necessary, Genesis has given its new concept a clamshell bonnet, like the Aston Martin DB11’s.

The clamshell bonnet design is normally used to allow better access when servicing the engine. However, it has the added benefit of improving a car’s aerodynamics by cutting down the number of panel gaps on its front end, which is important when trying to eke the maximum amount of range out of an electric powertrain.

Inside, the Genesis X concept features bucket seats, four-point harnesses and upholstery made from recycled materials. So, the steering wheel, seat belts and airbag cover are all trimmed in a weave-patterned fabric that’s made from leather offcuts which would otherwise be thrown away; something Genesis also aims to implement on its production vehicles.

Genesis’s global design chief, SangYup Lee, said: “The Genesis X concept can be described as the ultimate vision of Athletic Elegance; the inherent design language of Genesis. The signature Two Lines theme and sustainable luxury will be blueprints for the futuristic designs and state-of-the-art technologies that Genesis seeks to adopt in its future models."

The company’s designers also took the unusual decision to cover the driver and passenger seats with different colour materials. The former is scotch brown, while the latter is an ocean wave green blue, which the company says helps to mark a “differentiation of space.”

Unlike a conventional vehicle, the Genesis X concept doesn’t have an infotainment system. Instead, there’s a “Free-Form” display set into the swooping panel that surrounds the driver’s seat, controlled by another panel on the centre console.

The display is completely driver-focussed and has functions for the car’s climate control and navigation systems, as well as the usual speed and driving range instrumentation. Also mounted on the centre console is a new crystal sphere gear selector, which houses the drive mode options.

Genesis hasn’t yet confirmed any details about the concept’s platform or powertrain but, given the brand is owned by the Hyundai Group, we expect the car will be based on a version of the Korean firm’s latest E-GMP underpinnings. The platform supports both 400V and 800V charging and can provide a maximum range of up to 500km (around 310 miles).

The chassis also has impressive performance potential. The new Kia EV6 GT shares the same underpinnings, and it comes with four-wheel drive and a maximum output of 577bhp, which is enough to propel the crossover from 0–62mph in just 3.5 seconds.

What do you make of the new Genesis X concept? Let us know in the comments section below…