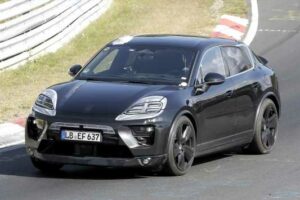 This is our latest glimpse of Porsche’s new Macan EV and for the first time it’s seen testing on the Nurburgring. We’ve spied it on the public road, but spending time on the ‘Green Hell’ should help refine the dynamics of one of the best-driving SUVs out there.

The Macan is Porsche’s best-selling model globally with 88,362 sales, just besting the Cayenne. The upcoming all-electric Macan should give Porsche’s mid-sized SUV extra appeal and could further consolidate its position as the most popular car from the Stuttgart brand.

There’s little change to this new prototype compared to previous test cars. We can see the slimmer headlight design – still incorporating the quad lights seen on the Taycan and smoother front bumper with no main grille. Instead, we’ll see a revised lower grille and large side air intakes – the upper section of which will house large secondary lights.

The side profile looks much more rakish and coupe-like than the current Macan, featuring a sloping roofline. Don’t expect there to be an upturned kink in the window line – that’s just the camouflage trying to throw you off. Behind the test car’s wheels we see six-piston brake calipers and large discs. The rear of the prototype shows an active rear spoiler and a full-width rear light. Fake exhaust cutouts will likely give way to a plain rear end and mild diffuser set up like the Taycan’s.

We previously received some images of the Macan EV from Porsche research and development boss Dr. Michael Steiner along with some of the technical targets his engineers are aiming to achieve.

The upcoming Audi Q6 e-tron will be the first VW Group car on the eagerly anticipated PPE platform, eventually followed by the Macan EV. Audi says the platform will allow for a range of around 430 miles, but with the decrease in aerodynamic efficiency in something relatively tall like the Macan, we should expect slightly less range. Maximum charging rates shouldn’t be affected by the kind of car built on the platform, however. Audi claims the architecture will allow a recharge from five to 80 per cent in around 25 minutes.

Porsche has undertaken its own significant digital development of the new model, using accurate computer simulation techniques to identify weaknesses in the model’s design. Porsche says this has allowed it to identify and resolve issues with the car virtually, before physical prototypes take to the road. For instance, the firm has developed a new display and operating concept in the interior, without actually building a real world prototype of the cockpit.

We’re expecting the Macan will be offered with a few different power outputs (most likely badged Turbo and Turbo S), as well as both short- and long-range battery packs. Porsche will also probably provide buyers with a choice of either rear- or four-wheel-drive, with the latter being achieved with the addition of an electric motor on the front axle.

Since its introduction in 2014, the Macan has been a huge success for Porsche – the company shifted almost 100,000 in the 2019 fiscal year, though it has fallen behind the Cayenne in the brand’s most recent delivery figures. That success hasn’t deterred the company from radically overhauling the mid-size SUV after only its first iteration.

Dr Steiner, Porsche’s executive board member for R&D told Auto Express in 2020: “It is an obligation for us, at Porsche, to think about and work on sporty answers to electric cars.

“The electric Macan will be based on a new electric platform, not a derivative. It was developed jointly with Audi, and is called the PPE. Knowing that there is not a lot of speed in the transition from ICE to electric, we are preparing to have both paths running in parallel.

“For a few years, the internal-combustion-engined Macan of today will be sold in parallel with the new fully electric car,” he told us. “And it depends on the market demand all around the world how long we will have both.”

Dr Steiner also mentioned how the Macan’s new underpinnings could open up the possibility of many more electric variants. He said: “PPE is totally different from the Taycan’s [J1 platform]. That was designed for cars sitting low, the PPE for the Macan is designed for high-floor cars, so there could be [electric] derivatives in the range of SUVs.”

Now read our list of the best electric SUVs…