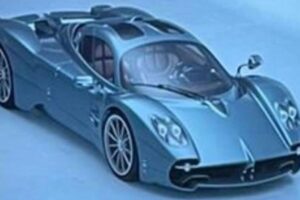 After more than a decade since the launch of the Pagani Huayra, its replacement has been keenly awaited by many. After numerous variations of Zonda and Huayra (codename C9), the rumoured Pagani C10 will be an all-new design for the Italian supercar manufacturer, and this image is thought to be a rendering of what Pagani’s third model could look like.

Leaked online via an anonymous Instagram account but subsequently taken down, the image has spread across the internet and has sparked great interest in Pagani’s next move –  and whether the company will confirm that this is indeed its new model.

Accompanying the rendering was a photo of what is claimed to be a document targeted at potential customers, which could signify that the rendering originates from a past sales event or presentation.

The low-resolution picture shows a car which exhibits some customary Pagani design traits, with clear styling cues evolved from both the Zonda and Huayra – such as small, individual rear wings and the car’s headlight design.

A number of apparent aerodynamic aids are also visible, which could help cement previous claims by Pagani that it intends to focus more on handling with the C10, rather than all-out power.

The overall styling also gives a somewhat retro impression, which would certainly help the new Pagani to stand out as much from competitors as its predecessors managed. Also, given the brand’s track record, and if this is indeed the C10, it’s a pretty safe bet that the interior will follow suit.

Although a hybrid powertrain has been rumoured for the near future, the C10 is believed to be the last fully combustion-powered car to come from Pagani. This suggests a Mercedes AMG-sourced engine, and given the brand’s relationship with the German manufacturer it’s thought that a new version of the 6.0-litre twin-turbo V12 could be used offering as much as a 40bhp increase over the Huayra, with the option of a manual or a dual-clutch gearbox.

It’s thought that around 300 C10s are currently planned for production, with Pagani claiming that demand has already been high. As with Paganis of the past, other variants, including a roadster, will also make up some of the total production number.

We’ll likely see the next Pagani model make its debut in the second half of 2022.

Now read our list of the Best V12 engined cars…