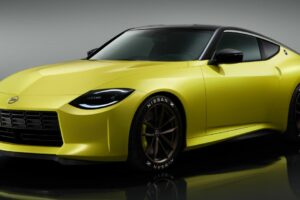 Sports car fans, it’s time to get excited because Nissan has confirmed an official debut date for the seventh-generation Z sports car – August 17. That’s less than a year since the Z Proto concept, which previewed the forthcoming model, graced our eyeballs last September.

As expected, the Japanese carmaker is remaining silent on the details until the big day, but we can piece together the puzzle from previous reports. For starters, the new Z (rumoured to be called the 400Z) is said to receive the same 3.0 litre twin-turbo V6 found in the Infiniti Q60 Red Sport 400 that serves up 400 hp and 475 Nm of torque.

Those figures represent a healthy gain over the outgoing 370Z, which offers 332 hp and 366 Nm from a 3.7 litre naturally-aspirated V6. Even the Nismo version of the sixth-generation model can only muster up 350 hp and 374 Nm, so expect a 0-96 km/h (0-60 mph) time closer to four seconds rather than five. Purists will be glad to know that a six-speed manual transmission will come as standard to drive the rear wheels, and there will be an option for an automatic as well.

As for the design of the new Z car, Nissan’s vice president of global design, Alfonso Albaisa, has said in the past that the production version will look just like the Z Proto. Given the numerous photos of the show car and spied production units floating around the internet, cues like the iconic fastback shape, large grille and lighting clusters inspired by past models should be familiar by now.

The same applies to the interior too, which retains the concept’s 8-inch touchscreen infotainment system, triple gauges above the centre air vents, a digital instrument cluster, three-spoke steering wheel and another purist-pleasing feature, a traditional handbrake.

We’ll only get final details about the all-new Z car when it debuts in a few months’ time, but now is certainly a good time for Japanese sports cars, given that models like the Honda NSX, Toyota GR Supra, GR 86, Subaru BRZ and Mazda MX-5/Miata all exist at the same time.