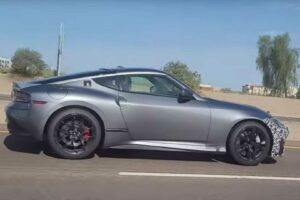 The new Nissan Z is really new. In fact, the sports car hasn’t even reached dealerships yet. That makes this highway sighting of two Zs in Arizona even more intriguing, because each car has its badges covered as if they were test vehicles. And one has its face covered with a camouflage wrap. Could Nissan already be testing an update before the current car is in the hands of buyers?

That’s a tough question to answer, as this spy video doesn’t come from our usual sources. Chrizleyva caught the cars on video and posted the action to YouTube, but without any previous encounters to reference, we only have brief glimpses in this clip to go by. Both cars have manufacturer license plates, so we know they belong to Nissan. We also see black tape covering Z badges on the side pillars and the Nissan badge on the nose. Those are the only things out of the ordinary on the first car we see.

Then we get to the second car, and that’s where things get more interesting. There’s more black tape on this one, with short strips visible on the quarter panel in front of the rear wheel, and again down low on the rocker panel behind the front wheel. The tape covers seams where the sill panel meets the fenders, but then we see a full camo wrap on the nose. It’s not a clear view, but it’s clear enough to see something jutting out from the bumper. The lower portion of the fascia looks a bit different as well. And we don’t see red brake calipers behind the front wheels.

That’s what we see, but what does it mean for the Z? The front fascia appears similar to the one used on the Fairlady Z Customized Proto shown by Nissan earlier this year. The protrusion in the bumper looks like the higher license plate mount, and camo wrap visible below it suggests there’s a split front grille. The Z Customized Proto was created just for show, but just maybe, Nissan will offer a version of that retro-themed face for buyers. It might be part of a package that, among other things, includes upgraded front brakes. It doesn’t explain the extra black tape on the sides, unless there are small, scripted badges underneath.

If it wasn’t for the easily identifiable changes on the front fascia, we could simply chalk up this sighting to a couple of test cars that never had camo bits removed. Clearly there’s something more happening here, but will this culminate in a special edition model or a future facelift? We’d love to hear your theories, so jump into the comments and let it rip. You can also catch More Nissan Z chat in Rambling About Cars, our official podcast included below.