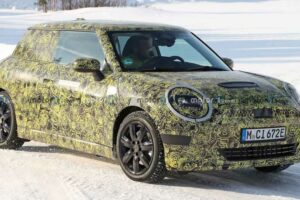 When we first saw it a year ago, the new Mini three-door tried to fool us with its camouflage. The coverings made it appear that the new Mini would keep its round taillights, but a leaked image late last year allegedly revealed the all-electric version with a unique taillight design. New spy shots show the hatch continuing to wear the disingenuous coverings, but the new yellow-colored camouflage makes the hatch’s outline – and the taillights – easily visible.

The hatch opening bisects the taillight coverings, revealing their shape, which matches the leaked image. The hatch’s outline was much harder to see in the earlier spy shots. The new photos show the car wearing a full camouflage wrap, hiding a familiar-looking design, though there could be some surprises underneath. At the front, the Mini still features round headlights on an otherwise simple face. 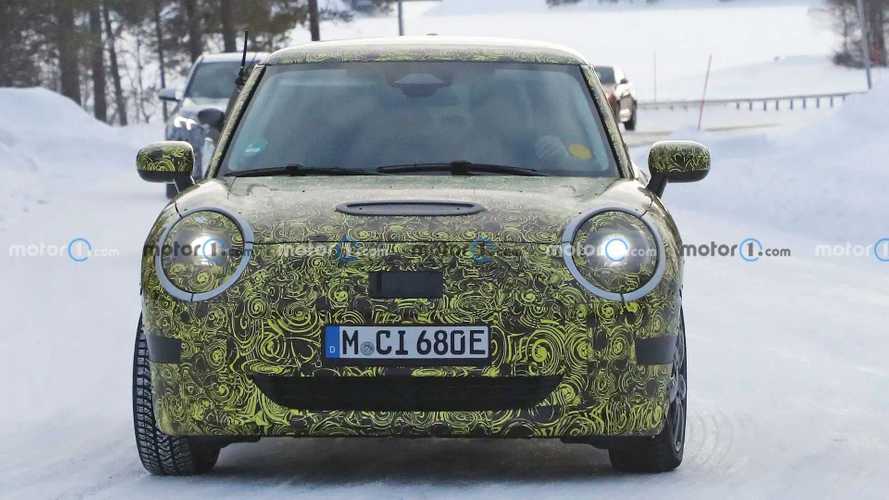 We haven’t seen the entire inside of the new Mini, but teaser images couldn’t hide it all from curious eyes. A large screen on the dash was clearly visible in many pictures of those pictures, and the new shots show a digital instrument cluster. The round dash-mounted screen is covered. Mini’s plan to tweak the exterior comes with interior changes, too. Mini announced last year that its next-generation of models would head upmarket with their interiors, which likely means finer materials – but not leather – and the latest technologies.

There has been no indication from Mini about the car’s powertrain. The new Mini EV, which appears will be smaller than its gas-powered sibling, doesn’t have a lot of room for a massive battery pack. However, improvements in the technology should give the new model more range than it currently offers, which is a puny 114 miles (183 kilometers).

The new all-electric Mini three-door will also spawn a five-door variant alongside the brand’s gas and diesel models. There will be a convertible and a hotter John Cooper Works version. Mini hasn’t announced a debut date for its next-generation electric vehicle, but the new model is scheduled to hit the market in 2023. The company has big plans to transition to an all-electric brand by 2030, and that’s not that far into the future.