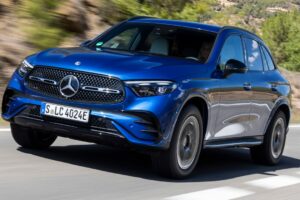 Mercedes has improved the GLC PHEV in all the important areas, but it’ll likely come at a price