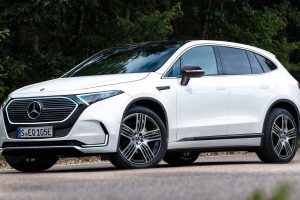 Mercedes chief designer Gorden Wagner tells us that the brand’s next two electric SUVs will be extremely forward-thinking with their design, while EQS coupe and cabrio models are unlikely

Following the reveal of its Mercedes EQS all-electric saloon flagship, the brand’s Chief Design Officer, Gorden Wagener, has claimed that Mercedes “will create SUVs of the future” with the upcoming EQS and EQE SUVs that will follow its new EV saloon range topper.

“They will look different in a similar way as I describe the EQS. They will be more seamless, more integrated, more aerodynamic, more futuristic looking, so it will be a new type of SUV,” he said.

As a result, the EQS and smaller EQE SUVs will not resemble their GLS and GLE combustion-engined counterparts but will feature a similar radical styling approach to one adopted by the EQS in comparison to its combustion-engined sibling, the S-Class.

“The windscreen will be stretched forward as with the EQS, let’s say more but not all the way forward,” Wagener added.

The EQS features a new “One Bow” design language that shuns a traditional three-box saloon look thanks to the freedom and flexibility the new car’s bespoke electric vehicle architecture has given Mercedes.

It’s likely that this design language will be replicated to a lesser degree on the higher riding SUVs compared with the low, swoopy EQS saloon. Wagener said that the styling lines “wouldn’t be as fast as you have it on lower cars like the EQS” but many of that car’s design cues will be carried across, likely including the front-end black panel. This approach will also become a crucial part in Mercedes’ attempts to differentiate different variants of its EQ models.

EQS AMG on the way but no coupe or convertible

The German brand has already confirmed that an AMG performance version of the EQS is in development, offering up to 751bhp. Without the requirements of having to cool a tuned engine, meaning big grilles and vents that partly define the aggressive look of AMG’s cars, Mercedes could replicate the graphic of the AMG-specific Panamericana grille with the EQS’s black panel.

“There will be similar differentiation as you know it from other AMG models, which of course have the Panamericana grille with the vertical bars, so it could be likely that we do something similar for an electric car,” Wagener said.

Mercedes’ design boss did outline that it’s highly unlikely that there will be any other EQS body styles beyond a saloon and an SUV however, mirroring what Mercedes has done recently by scrapping the C-Class Coupe and Cabriolet.

“Body styles like coupes and cabriolets are specialty cars and I think in the future we will see them less and less. Overall, I think specialty [cars] will only make up 15 per cent of the market in the future.

“We will see over 50 per cent SUV variants, and then the rest will be sedans, around 30 per cent, just to give rough numbers, which means we definitely won’t do coupe or cabriolet versions in every segment.

“When you look at numbers a coupe generates typically only a third of the [sales] numbers of a limousine. We will have a good amount of dream cars – we will launch our new SL, the first SL I did after even 20 years at the company, and I think it will refer very much to the first one in some ways and bring that icon back.”

Wagener wouldn’t comment on whether or not a Maybach version of the EQS is in the pipeline, but smiled when asked.

Given both the combustion-engined S-Class and GLS SUVs are both offered in Maybach trim, it’d be likely the EQS would get similar high-end treatment in time – and potentially the EQS SUV too.

Speaking of the EQS SUV Wagener added that “we don’t have to wait too long until we show something of what an SUV of the future could look like,” hinting that Mercedes could reveal initial images of the vehicle and its design at some point this year.