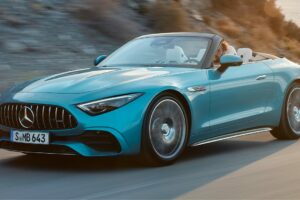 Until now, the new Mercedes-AMG SL has been available with two flavours of V8 engine, but the 2+2 roadster will now also be offered for the first time in four-cylinder form, badged SL 43.

Despite halving its cylinder count, the new variant is set to pack a strong punch thanks to an electric turbocharger – a world-first for a production car, according to Mercedes, and derived from its Formula 1 engine tech.

Visually, the SL 43 distinguishes itself from its beefier V8 counterparts with a smoother-looking front apron and a tweaked rear end featuring round tailpipes rather than the square items fitted to the SL 55 and SL 63. The SL’s classic long-bonnet, cab-rear proportions are unchanged, with Mercedes’ trademark Panamericana grille up front and a smooth, rounded silhouette.

For increased downforce, less drag and a more purposeful look, Mercedes offers an Aerodynamics Package for the SL 43, with additional aero elements on the front and rear bumpers, as well as a steeper angle of attack for the active rear spoiler. The SL 43 rides on 19-inch wheels as standard, with optional 20 and 21-inch alloys also available.

Nestled in the long nose is a 2.0-litre four-cylinder motor already used in other AMG models, such as the A 45 S hyper hatch. However, in the SL 43, it’s fitted with an electric exhaust gas turbocharger.

The technology is derived from Mercedes’ Formula 1 engines and aims to minimise lag by spinning the turbo up using an electric motor before it is driven by exhaust gases. Even when coasting or braking, the turbocharger maintains boost pressure for better response when the driver gets on the throttle.

The system is linked to the SL’s 48-volt electrical system, which also feeds a belt-driven starter/generator that can provide a 14bhp boost for short periods – the result is peak power of 376bhp and 480Nm of torque. Crucially, while these figures fall significantly short of the SL 55 and SL 63, the entry-level car is rear-wheel drive, ditching the 4Matic+ system of its V8 siblings. Drive is sent through a nine-speed MCT gearbox, with a Race Start function enabling a 4.9-second 0-62mph time. The SL 43 will power on to a top speed of 171mph.

Also key to the SL 43’s dynamic repertoire is its 1,810kg kerb weight. While it might not play to the roadster’s ‘Sport Light’ nomenclature, the SL 43 is 140kg lighter than the SL 55 thanks to its smaller engine and two-wheel drive set-up. With most of this weight saving at the nose of the car, the SL 43 could be the sweetest handling model in the range.

To further improve low-speed agility and security at higher speed, the SL 43 can be specified with active rear-wheel steering, while optional adaptive dampers aim to improve its breadth of ability, offering a choice of settings from Comfort through to Sport+. An AMG Dynamic Plus package is also available, bringing active engine mounts, an electronically controlled limited-slip differential, a 10mm reduction in ride height and a sportier Race driving mode.

The SL 43 adopts the same new architecture developed by AMG for the V8 models, which allows for a 2+2 seating layout. The structure is 18 per cent stronger compared with its predecessor when it comes to torsional rigidity, while the new SL uses a triple-layer fabric roof in place of the previous car’s folding metal solution, saving 21kg. It can be operated at up to 37mph and takes 15 seconds to open and close.

The cabin is the same as other SLs, with a two-tier dashboard dominated by a portrait-orientated touchscreen in the centre. It runs Mercedes’ latest MBUX infotainment system, and its angle can be adjusted through 20 degrees to prevent reflections when the roof is down. There’s also a 12.3-inch digital instrument panel, and a variety of upholstery and trim options, including Artico synthetic leather, nappa hides and carbon fibre accents.

Pricing for the SL 43 will be confirmed next month, but expect a significant saving over the SL 55’s £147,475 asking price.

Click here for our review of the V8-powered SL 63…