New Land Rover Defender 130 is here for the long haul 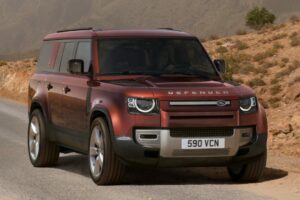 The new stretched Land Rover Defender 130 is more than 5.3 metres long and arrives with eight seats as standard

Land Rover has been enjoying huge sales success with the Defender since it landed in dealerships last year. Now the British brand will be hoping to find even more customers with the biggest version of the off-roader to date: the Land Rover 130.

The 130 takes the already-substantial 110 edition of the Defender and adds an extra 340mm beyond the B-pillars, making it 5,358mm long – that’s more than 10cm longer than the seven-seat version of the latest Range Rover.

Land Rover claims that this extended rear overhang doesn’t impact on the Defender’s off-road ability; it retains approach and departure angles of 37.5 degrees and 28.5 degrees respectively, and has a maximum wading depth of 900mm.

But the longer body frees up so much additional space in the cabin that engineers have been able to install a third seat in the last row. That means there is now the possibility of a two-three-three seating layout, making the car an eight-seater and taking it beyond the capacity of the seven-seat 110.

Land Rover clearly believes the additional capacity will be a key selling point; the car will be an eight-seater by default, and the removal of the third row to make it a five-seater will be offered as a no-cost option.

The Defender 130 will be available with a choice of three powertrains in the UK – customers here miss out on the leaner, less powerful diesel, while there’s no plug-in hybrid version either.

Inside, the Defender 130 gets the larger 11.4-inch Pivi Pro touchscreen infotainment system that was introduced on the higher-end 90 and 110 V8 models, as well as standard air purification. Other features include Smart Voice Guidance, which reduces the amount of instructions required in familiar surroundings, and what3words location functionality.

There’s also the option for the third row of seats to be heated, and those in the sixth, seventh and eighth seats also get padded armrests and USB-C charging ports. Up to five of the eight seats (the outer seats in the second and third rows, along with the front passenger seat) can feature Isofix mounting points.

The extra rear overhang gives the Defender 130 some impressive-looking outright practicality figures. Eight-seat versions have 389 litres of boot space with all three rows in place, and this extends to almost 2,300 litres with the second and third rows folded into the floor. The ultimate capacity is slightly higher in the five-seat version, which can carry up to 2,516 litres.

There will be four trim levels – SE, HSE, X-Dynamic and X – along with a First Edition that comes in a choice of three themes curated by Land Rover’s design team. The existing range of exterior accessories – including the Explorer, Adventure, Country and Urban packs – will be offered on the 130, just as they are on the 90 and 110.