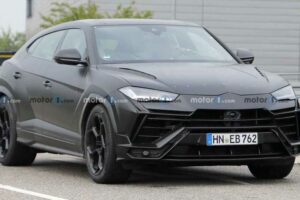 The Lamborghini Urus turns four this year, and the Italian automaker is already preparing its mid-cycle refresh. It’ll be more extensive than the SUV’s 2021 update, but the latest batch of spy shots continues to show off a familiar-looking Lamborghini.

Lamborghini will give the Urus Evo the standard facelift protocol – a revised front fascia. Lamborghini hasn’t tried hard to hide the SUV’s new face, which will receive new horizontal elements in the grille. The Urus will also receive revised headlights and restyled hood.

The automaker will also revamp the rear, giving the Urus Evo a redesigned bumper with reshaped rear fender vents. We haven’t seen inside the new model, but we expect Lamborghini to make some tweaks. However, we don’t how much the company will change inside.

All signs point to the Urus Evo using the current 4.0-liter twin-turbocharged V8. It makes 641 horsepower (479 kilowatts) and 628 pound-feet (848 Newton-meters) of torque. There’s a good chance Lamborghini will tweak it to produce a bit more power. The current SUV can hit 62 miles per hour (100 kilometers per hour) in 3.6 seconds, and the Urus Evo could be a smidge quicker. Expect the eight-speed gearbox to carry over, too.

There are hints that there could be a hotter Urus Evo in development, but we’ll have to wait for more information or a leak. However, we know that Lamborghini plans to electrify the Urus at some point entirely, but it might not happen with this next iteration. Instead, we’ll get a Urus hybrid as the company plans to offer all its models with some form of electric assist by the end of 2024.

Lamborghini hasn’t announced when it will reveal the new Urus. We first spotted the redesigned model out testing in early 2021, and we hope the debut is right around the corner as there are indications that it will debut at this year’s Pebble Beach before going on sale before 2023 begins. While it’s only May, there’s still a lot of time left in 2022 for anything to happen, and seeing a redesigned Urus would be a big plus.