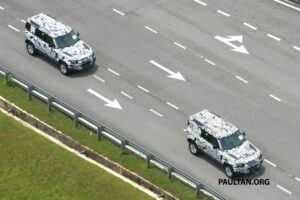 Last week, Jaguar Land Rover Malaysia hinted at the launch of the latest L663 Defender by listing the off-road SUV on its official website, although it didn’t provide an official introduction date at the time. However, it appears the Defender could be making its launch debut soon, as two camouflaged units were spotted by paultan.org driving along Jalan Kemajuan Subang recently.

The camouflage hides the majority of the Defenders’ bodies, but cues like the round headlamps, safari windows on the roof, circular taillights and full-size spare tyre mounted on the tailgate are clear to see. On that mention, the six-twin-spoke wheels fitted on these cars look identical to the 19-inch items that is standard on the S trim level of the Defender.

Meanwhile, the P400 MHEV features an Ingenium 3.0 litre turbocharged straight-six with 400 PS (395 hp) and 550 Nm. The “MHEV” indicates the presence of a mild hybrid system that is made up of a 48-volt electric supercharger, a belt-integrated starter motor in place of the alternator to assist the petrol engine, and a 48-volt lithium-ion battery to store energy captured as the vehicle slows down.

Both engines are mated to a ZF eight-speed automatic transmission with a two-speed transfer case sending drive to all four wheels. The new Defender also gets optional locking centre and rear differentials, the latter being a new addition for the breed, with most drive systems controlled via the Terrain Response interface. The base, S, SE and HSE trims can be specified with either powertrain, but the X can only be had with the P400 MHEV, and this extends to the First Edition version of the 90 and 110 listed on the site. No pricing for the Defender range just yet, as we’ll only get that when the car is officially launched here, whenever that will be.

Compared to its predecessors, the latest Defender represents a leap into the future for the nameplate, as it is now built on JLR’s D7x architecture of an all-aluminium monocoque construction, replacing the previous body-on-frame designs. The model also boasts a more luxurious and better-equipped cabin than before, but despite this, it still has capable off-road chops.