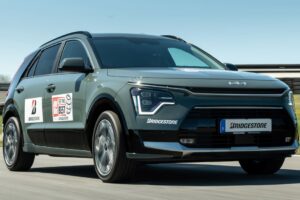 Kia has certainly moved the Niro on, and our first taste of this new hybrid model proves it shows real promise. The same great efficiency potential returns, but it’s now joined by a stronger technology offering, a massively improved level of practicality and space, and even sharper style. It’s still so-so to drive, but comfortable enough, which is fine in this class.

As of April this year, Kia was the number one best-selling car brand in the UK. It’s family SUVs accounted for a significant chunk of its impressive sales performance so far in 2022, and later this year there’ll be a new model joining its line-up in the form of the second-generation Niro – and Auto Express has driven a pre-production model already.

The Niro will be available with three powertrains, this full hybrid (HEV), a plug-in hybrid and a fully electric version with the Niro EV.

Our test car uses a 1.6-litre naturally aspirated petrol engine that works alongside an electric motor fed by a compact 1.32kWh battery. The combined output is 139bhp, but with 43bhp and 170Nm from the electric motor alone, performance in EV mode is strong enough for easy acceleration in town driving, where the Niro’s all-electric performance might be needed most.

A clever feature that’s part of the sat-nav system also recognises low-emission zones and will prioritise running on electric power alone when you reach these areas on your journey, too.

With both power sources working the 0-62mph sprint takes 11.1 seconds, but the Niro doesn’t feel all that rapid – and it’s best not to push the powertrain too hard either, as full-throttle acceleration means the six-speed dual-clutch automatic transmission kicks down sending engine revs soaring and impacting refinement.

The petrol unit doesn’t sound that pleasant under hard load, droning and impacting the otherwise strong level of refinement the Niro delivers when you’re cruising around more gently at a leisurely pace. It means you can make the most of the car’s brake energy recouperation settings too, something Kia has learnt from its models such as the EV6 and applied to this new generation of hybrid.

In Sport mode the paddles shift gears, but we’d recommend avoiding this, leaving the gearbox to its own devices and sticking with the default Eco mode. In this setting the steering wheel paddles control the brake regen. The settings range from off to Level 3, while if you hold the left-hand paddle down the car will automatically jump to ‘Max’ regen.

For a hybrid this is really quite strong and, as long as you predict traffic conditions and corners well in advance, it’s enough to drive with one pedal most of the time. It also helps to recharge the battery as much as possible in town, maximising electric running.

This really is when the car feels most at home, as the ride is on the softer side. It means through quick direction changes on more open roads the Niro does roll, and you can easily find the limit of its body control. But the Niro isn’t a car for this type of driving and the mostly forgiving approach to the ride means over lumpy, bumpy urban tarmac, potholes and expansion strips, the Niro’s suspension smooths out a fair degree of unwanted movement.

Headroom is great, and it feels as though there’s nearly as much legroom as in the brand’s larger Sportage SUV. The Niro is full of clever solutions as well. There’s a new foldable parcel shelf that takes up less space when not in use compared with the original Niro – partly because there’s no space to put a conventional load cover now, as Kia has also freed up more boot space for this new car.

With the rear seats in place there are 451 litres on offer, which is more than respectable for a compact hybrid SUV that also has to package a small battery.

The fresh, new design looks sharper and sportier than before, and in keeping with Kia’s now fully refreshed SUV range the Niro feels modern, not least thanks to the personalisation potential with the sleek side blades on the car’s C-pillars.

Inside, it feels more upmarket too. On our European test car that equated to the £33,245 top-spec 4 model we’ll get in the UK, there’s a pair of 10.25-inch screens for the infotainment and digital dash, arranged in a gently curved panel that replicates the larger 12.3-inch screens from the Sportage and EV 6; the clever panel beneath this that switches between audio and climate settings is also present.

There’s also a head-up display and a three-pin plug to charge gadgets on board. Full keyless go, heated and cooled front seats and heated rear seats, all-round parking sensors, Apple CarPlay and Android Auto, a Harman Kardon stereo, a powered tailgate and plenty of driver assistance systems are fitted as standard, too.

There’s lots of kit and a decent degree of quality even from our pre-production test car, although this top-spec Niro is on the pricey side. However, there’s another big benefit. Official efficiency info hasn’t been outlined but given the new Niro Hybrid shares its powertrain with its predecessor, predicted fuel economy of up to 65.7mpg and CO2 emissions of 120g/km mean it should be affordable to run.