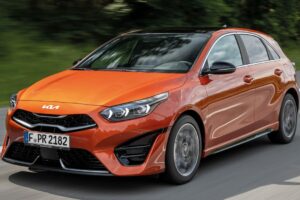 This is the facelifted Kia Ceed. It’ll reach UK showrooms later this year with a host of upgrades designed to keep it competitive with newer rivals such as the Volkswagen Golf and the eleventh-generation Honda Civic.

As part of the update, Kia has redesigned the Ceed’s front end, which features a fresh pair of LED headlamps, two new intakes in the front bumper and the latest version of its trademark “Tiger Nose” grille. At the rear, the tailgate has been smoothed over and there’s a new gloss black diffuser fitted to the lower edge of the bumper.

Inside, there’s a new gear knob and a choice of four more upholstery designs, which takes the Ceed’s total number of interior trim options to nine. The ProCeed GT-Line S model also comes with a 12.3-inch digital instrument cluster and a 10.25-inch infotainment system.

The ProCeed GT-Line S also gets electrically adjustable seats and an eight-speaker JBL stereo system, while the Ceed Sportswagon estate gets an electrically operated tailgate. Depending on the specification, buyers can have heated and ventilated front seats, heated rear seats and two-zone automatic air conditioning, although Kia hasn’t yet released a full breakdown of the updated Ceed’s equipment levels.

However, one thing Kia has discussed at length is the Ceed’s new safety features. Upgrades over the old model include leading vehicle departure alert, which informs the driver when the car in front has pulled away from a standstill. Blind-spot collision avoidance is another new addition, which can step in to mitigate accidents with the rear quarter of the vehicle.

There’s a new rear-view monitor, too, designed to help with reversing into parking spaces or hitching up a trailer. Kia has also added an extra button which activates the camera while driving, essentially giving the driver an extra rear-view mirror.

Buyers have a similar choice of petrol and diesel engines as the previous Ceed, with outputs ranging from 99bhp to 201bhp in the GT hot hatchback. However, Kia has swapped the majority of the Ceed’s powertrains to those fitted with its Smartstream technology.

Essentially, Smartstream is a variable valve timing system which has dedicated maps for outright performance or fuel economy, depending on how the car is being driven. It’s coupled with a new low-pressure exhaust gas recirculation system, which feeds some of the hot gasses from the engine back into the combustion chamber to further benefit fuel economy.

The old Ceed’s 1.0-litre three-cylinder engine has survived the update untouched, but the hatchback’s 1.4-litre petrol engine has been swapped for a Smartstream-equipped 1.5-litre unit. It produces 158bhp and is available with either a seven-speed automatic or six-speed manual gearbox, which features Kia’s clutch-by-wire technology.

Diesel models are powered by a 134bhp 1.6-litre engine – and they all come with mild-hybrid assistance. Like the petrol, there’s a choice of either a six-speed manual or seven-speed automatic gearbox.

At the top of the line-up, there’s the GT model. It’s powered by a 201bhp 1.6-litre four-cylinder petrol engine, which is only available with a seven-speed automatic gearbox. Performance specs for the facelifted model haven’t yet been confirmed, but the previous car could get from 0–62mph in 7.2 seconds.