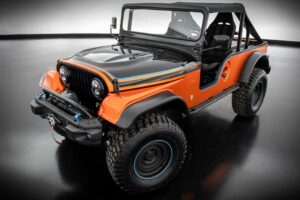 The future of Jeep tuning will embrace electrification, as showcased in new restomod concept car

It’s more than a hint that the parts manufacturer is developing electric conversion kits for both classic and current Jeep models. The CJ Surge is similar to the brand’s Magneto concept revealed in 2021, and updated in ‘2.0’ format earlier this year, in that it’s an emissions free off-roader. However, the Magneto was based on the current-generation Wrangler, and not a classic model, as is the case here.

The CJ Surge makes use of a custom-designed electric battery and motor system. In place of the combustion engine is a ‘scalable’ 400-volt electric drive unit, developing 268bhp. It’s mounted directly into the CJ’s original frame using custom mounts, while Jeep says that it’s a “true 4×4” with power going to all four wheels via a two-speed automatic transmission with selectable ratios.

The battery is packaged into an enclosed custom shell in the rear of the passenger cell, made up of 24 separate modules. A custom-made charging socket is placed just behind the driver’s door. Jeep hasn’t revealed the battery capacity or any range and performance figures, but that’s not the point of the CJ Surge concept – at least for now.

Instead, it’s Jeep and Mopar communicating with fans of the brand that they’re already thinking of what the future of Jeep customisation will look like, and that the marque’s openness to modification and personalisation will be preserved in the all-electric era.

To that end, some typical off-road-style modifications have been made to the chassis. The CJ Surge makes use of a two-inch suspension lift kit and 35-inch all-terrain rubber from BR Goodrich to give it an elevated stance. Dana 44 Crate axles at both the front and rear provide more ground clearance, and extra toughness and durability to go with it, and are joined under the body by JPP Rubicon skid plates front and rear.

Other touches include enlarged front and rear fenders, a custom roll-cage and ‘bikini’ removable hood roof, along with a front winch system. The paint scheme features a Copper Canyon body with gloss black and surf blue accents, and matte black 18-inch wheels.

After a slow start, Jeep’s electrification drive is picking up pace. The brand has made several rapid-fire reveals of new all-electric models, including the new Avenger compact SUV and Wagoneer S large luxury off-roader, plus future models designed for zero-emission off-roading such as the rugged looking Recon, due in 2025, and the Avenger 4×4 concept.

Auto Express understands that familiar models, such as the Compass and Renegade, are also both to be renewed with next-generation models featuring electric drivetrains.