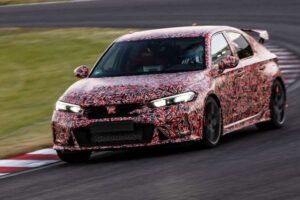 Honda is certainly being dramatic with its new Civic Type R. The next-generation hot hatchback recently made its official debut in the United States, though still in camouflaged prototype form. Prior to that, it debuted in January at the Tokyo Auto Salon – also still as a camo-wrapped test car. Going back further, we have unofficial spy shots and official teasers of the Civic that are nearly a year old.

Now, we at least have some concrete information to share, albeit unconfirmed and unofficial. A post to the Civic11Forum claims to list the Type R’s available exterior colors at launch. The universally accepted shades of black, white, and gray are on the list. Blue and red join the mix to add some actual color, but if this post is accurate, that’s all you will get for at least the first year. Sorry, Phoenix Yellow fans. Looks like you’ll miss round one.

As for the available colors, the official names are Championship White, Rallye Red, Sonic Gray Pearl, Crystal Black Pearl, and Boost Blue Pearl. Regardless of the exterior color, every new Civic Type R will have the same interior dressed in black and red. The exact pattern of this two-tone combo is still unknown.

The information appeared to come from a Twitter post that has since been deleted. A screenshot in the forum post shows what appears to be a back-end order screen listing the colors, but until Honda finally reveals the new Type R, we can’t be absolutely sure these are legit shades available at launch.

Therein lies the all-important question – when will the 2023 Civic Type R finally, officially, debut? We thought it was coming towards the end of June, or at least that’s what a Honda executive from Australia allegedly said in May. We had our suspicions about that when we learned the Type R would make its initial appearance in the US the first weekend of July, still wrapped in camouflage. That event came and went, with the camo’d Type R prototype turning laps at Mid-Ohio ahead of last weekend’s Indy race.

Honda’s US headquarters is also in Ohio, so there’s certainly some symmetry with the Type R showing off at the “local” track. We also thought it might be an indication of an official debut, though that has yet to happen. Whether supply chain issues or a COVID-10 resurgence are causing delays is unknown, but Honda has pledged to have the amped-up Civic on sale by the end of the year. That means a debut must happen soon.