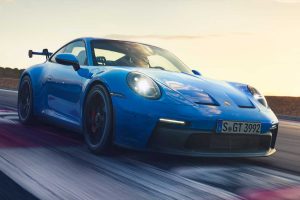 The latest Porsche 911 GT3 gets a new naturally-aspirated 4.0-litre flat-six engine and will be available with a manual or PDK auto gearbox

When it comes to hardcore performance cars, few command more attention from enthusiasts than a new Porsche 911 GT3 – and this is the latest road racer from the German brand.

Priced from £123,100, the new model has been developed in close collaboration with Porsche’s motorsport division, taking race car technology to the road.

This includes the GT3’s new 503bhp naturally-aspirated 4.0-litre flat-six engine, meaning this is the only 911 in the latest 992-generation line-up not to feature turbocharging.

It will be offered with a seven-speed PDK dual-clutch automatic gearbox, sending its power to the rear wheels only. Combined with launch control the GT3 will accelerate from 0-62mph in 3.4 seconds. A six-speed manual will also be offered, giving drivers an even greater connection with the car.

Key to the GT3’s development has been the move to the 992-generation 911’s Modular Mid-Engine MMB platform. As a result, all GT3s will be based on Porsche’s widebody architecture, but despite this and the car’s larger 20-inch front and 21-inch rear alloy wheels (which house bigger brakes – steel as standard, carbon ceramic optional), the new GT3 only weighs 5kg more than its predecessor in PDK form, at 1,435kg.

That’s thanks to extensive use of carbon fibre-reinforced plastic, including for the bonnet, thinner glass for the windows, forged wheels and a lightweight exhaust that saves 10kg.

Underneath the GT3’s new flared body there has been a significant re-engineering of the technology, with the car adopting a double wishbone front suspension layout, whereas all other models in the 911’s 58-year history have featured MacPherson struts for the front suspension.

This tech transfer has come from the 911 RSR race car, which uses a similar set-up, while the GT3 has also inherited aerodynamic know-how from Porsche’s track competitors.

The GT3’s ‘swan neck’ rear wing mounts support a huge spoiler for added downforce and high-speed stability given the car’s 198mph top speed (199mph if you opt for the manual gearbox). Porsche claims the GT3 delivers “significantly higher levels of downforce [than its predecessor] without noticeably affecting the drag coefficient.”

Teamed with a huge diffuser, the aerodynamic package can be manually adjusted for track days, which is where the GT3 should really impress.

There’s plenty of track-focused tech on board, as the infotainment features a new track screen. This reduces the information on the digital displays to the left and right of the central analogue rev counter (marked all the way up to 10,000rpm, although the motor only revs to 9,000).

In this mode it will show data more important for track driving, such as tyre pressures, oil temperature and pressure, plus fuel level. There’s also a motorsport-derived shift light system.

Porsche has also added plenty of personalisation options so owners can tailor the spec of their car, including even more lightweight parts, such as an exposed carbon fibre roof and door mirror caps, as well as painted wheel rims.