New Ford Super Duty Will Debut In The Fall 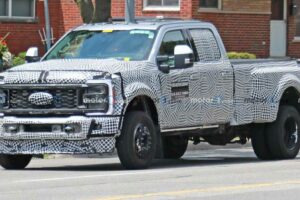 This fall is shaping up to be quite exciting for Ford and its massive customer and fan base. The Blue oval company will launch the next-generation Mustang during the Detroit Motor Show in September, and it seems that at least one more important addition to the lineup is scheduled to arrive this autumn. The automaker has basically confirmed the next-generation Super Duty will debut later this year.

Ford CEO Jim Farley said during Ford’s Q2 earnings call that the new heavy-duty truck will be introduced “before the end of the year.” We’ve seen a fair share of spy photos with the large pickup and we know the company is now putting the finishing touches. Whether the official debut will take place at the Detroit Motor Show or at a separate event later during the year, we can’t tell for now. However, we suppose Ford will want all the attention in Detroit for the new Mustang’s big debut.

Visually, the new Super Duty borrows design influences from the new F-150, especially at the front where C-shaped lights surround different grilles depending on the trim level. The radiator grille itself and the Ford logo are probably going to grow in size slightly compared to the outgoing model, giving the Super Duty an even more imposing appearance at the front.

At the back, the design of the taillights is similar to the current look but there are some minor tweaks. The shape is now longer and more narrow, though there doesn’t seem to be changes to the light arrangement within the clusters. Inside the cabin, we expect a new dashboard with an F-150-inspired large tablet-style screen dominating the center console.

Despite the revised exterior, we don’t expect huge changes for the big truck under the hood. Ford’s tried and tested range of gasoline and diesel engines is likely to carry over to the new generation with little modifications. It includes a 6.2-liter V8, a 7.3-liter pushrod V8, and a turbocharged 6.7-liter Powerstroke diesel.