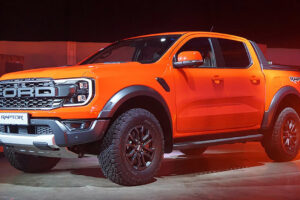 Order books are now open for the Ford Ranger Raptor, a hardcore version of the Blue Oval’s all-new Ranger.

It’s the first derivative of the new-generation pick-up to go on sale – with the standard model not joining the configurator for another few months yet – and it’s priced from £57,340. First deliveries of the Raptor will commence at the tail end of summer, while regular Rangers aren’t expected to be in the hands of customers until the first quarter of 2023.

As with the outgoing Raptor, it won’t be possible to knock the VAT off the lofty opening figure – the Raptor’s beefed-up chassis components eat into the payload, dropping it below the one tonne qualifying threshold for commercial vehicles.

It’s also possible to inflate the Raptor’s price tag further with various options, including the Raptor Splash Decal Pack for £600, a £1,860 Raptor Pack with a cab roll-over bar and a powered roll top, and New Code Orange paint costing £720.

Initially, the Raptor will be sold with a new 3.0-litre twin-turbo EcoBoost petrol V6 producing 284bhp – an increase of 74bhp over the outgoing four-cylinder diesel-powered model. However, that engine will eventually be available in the new Raptor for an as-yet-undisclosed price.

The V6 version makes 491Nm, almost as much as the diesel. An anti-lag system features, similar to the set-up originally seen in the Ford GT supercar, which boosts throttle response by keeping the turbos spinning for three seconds when the driver lifts off. An active exhaust offers four noise levels, too, including a neighbour-appeasing Quiet mode and a Baja setting, which adds more volume and is described as being like a straight-through exhaust system.

The 10-speed auto gearbox is carried over from the first Raptor, but this time there are specific engine boost profiles for each gear to optimise performance. Full-time four-wheel drive is standard (although it can be switched to rear-wheel drive to save fuel), while front and rear locking differentials and seven selectable drive modes mean the Ford should be able to tackle anything from smooth tarmac to deep mud and ruts.

There’s a unique chassis set-up when compared with the standard Ranger to boost the Raptor’s off-road performance. Reinforced components and under-body protection feature throughout, while beefier aluminium control arms and all-new high-performance Fox dampers are added. These so-called 2.5-inch Live Valve dampers have been specifically tuned for the Ranger Raptor and are designed to react to suspension movements, providing stiffer damping when necessary, such as when clearing jumps.

To make the most of this new set-up, Baja mode optimises the truck’s settings for fast off-road use. In addition there’s Trail Control, an off-road cruise control system that maintains a set speed below 20mph, allowing the driver to concentrate on steering through tough terrain.

Outside, the Ranger Raptor has a look similar to that of the larger US-market F-150 Raptor. The C-shaped daytime running lights are standard issue across the Ranger line-up, while the Raptor adds matrix LED headlights. There’s a vast FORD-branded grille, while black bumpers with a silver bash plate are added below. Flared wheelarches cover the truck’s wider track, while the black 17-inch alloys are fitted with all-terrain tyres for a total diameter of 33 inches. The rear bumper also includes a standard-fit tow bar.

Inside, the Raptor adds sports seats ‘inspired by the F-22 Raptor fighter jet’, while the ‘Code Orange’ highlights for the air vents and leather stitching match the exterior paint, which is an exclusive hue for the new Raptor. Also fitted inside are a vast 12-inch portrait touchscreen with SYNC4, plus digital dials and numerous menus to allow you to configure everything from the climate control to the diff locks to the exhaust settings.

Performance figures for the new Ranger Raptor have yet to be confirmed, although Ford’s Australian engineers took great pride in the fact that the new model was a minute faster than the old model over their unspecified test course. The new model is expected to weight around 40kg more than the outgoing model, so the extra power is sure to boost performance considerably.

What’s the difference between the Ranger Raptor and Bronco Raptor?

The new Ford Ranger Raptor is based on the same platform as the recently revealed US-market Bronco Raptor. While one is a pick-up and the other is an off-road focused SUV, there are other distinct differences, too. For starters, the Ranger Raptor’s wheel and tyre combo measures 33 inches in diameter, while the Bronco Raptor has an overall wheel and tyre diameter of 37 inches.

The other big difference is under the bonnet. While both vehicles use the same 3.0-litre twin-turbo V6, there’s 284bhp on offer in the Ranger, while the Bronco has an as-yet unconfirmed output in excess of 400bhp. The extra 110bhp or so can be put down to emissions legislation – US market restrictions differ greatly from those in Europe, and a maximum of 284bhp for the Ranger Raptor was deemed sufficient to balance power against emissions. Since these two use the same basic configuration, it’s not beyond the realms of possibility to produce a 400bhp Ranger Raptor, although it’s not something that Ford is currently considering.