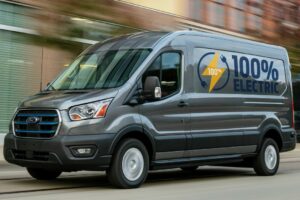 Prices have been announced for the all-electric Ford E-Transit, and the new large van is set to be one of the most competitively priced large electric vans on the market. A starting price of £42,695 (+VAT) is less than rivals such as the Renault Master E-Tech and Mercedes eSprinter, while Ford is closing in on a claimed WLTP range of 196 miles for the newcomer.

Ford's new electric panel van is based on the existing Transit, but has been fitted with a 67kWh battery and a choice of two electric motor power outputs of 181bhp or 266bhp, which send power to the rear wheels. There's up to 430Nm of torque on offer, while the maximum payload stands at 1,758kg.

The new E-Transit will be offered in a wide range of body styles, including various panel van lengths and roof heights, chassis cab and as a multi-seat Double Cab in-Van. There will be 25 body variants in total, and since the battery is located under the chassis, that means the panel van versions will offer the same cargo volumes as the diesel version.

From the outside, the E-Transit is marked out from diesel Transits by a new grille with blue bars, a charging socket in the nose and E-Transit badging. Under the bonnet there's a 265bhp electric motor, which means the E-Transit will be the most powerful electric van for sale in the UK. That motor drives the rear wheels, while 430Nm of torque means it has the power to cope with large payloads.

A 11.3kW on-board charger means a full charge is possible in just over 8 hours from a suitable source. However, find a high-power DC source of up to 115kW and the E-Transit can be charged from 15 to 80 per cent capacity in around 34 minutes. Another innovation is Ford's Pro Power Onboard, which provides a 2.3kW outlet so that users can power tools and other equipment via the van's battery.

Ford claims that the low-maintenance nature of the electric running gear means that while the initial purchase price of the E-Transit is high – although not as high as some rivals – overall total cost of ownership should bring benefits. With less money going towards fuel and maintenance, costs should be around 40 per cent lower than they are for a diesel Transit.

Inside, Ford has revised the entire Transit range to coincide with the arrival of the E-Transit. Sync4 infotainment has been introduced, with a 12-inch touchscreen that's fitted as standard on the electric van, with over-the-air updates, enhanced voice control and sat-nav live traffic information all on offer.

The Ford E-Transit is now being trialled with a variety of fleet operators throughout the rest of 2021 in various European markets. Deliveries to customers are set to start in spring 2022.

What do you make of the new, pure-electric Ford E-Transit? Let us know in the comments section below…