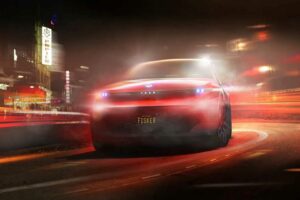 Fisker plans to launch its most affordable model, the Pear, which is slated to start from $29,900 before incentives, according to the manufacturer. Unlike the first new Fisker to come out, the Ocean, the Pear will not be an SUV and based on the teasers the company has shared so far, it looks like it’s going to be a sporty looking hatchback.

Previous teasers gave us an idea of the vehicle’s shape and style, but a new image shared by company boss Henrik Fisker gives us our best look so far. This time he posted an image showing the entire front end of the vehicle, as well as a bit of the side, pretty clearly – it’s even got a number plate, hinting that this design may, in fact, be final – it certainly looks like a production car, with an actual open grille and what appears to be a sensor pod for the self driving systems.

Mr. Fisker wrote in his latest post about the Pear that the company is on track with its development and that they will even show a prototype sooner than initially planned. He describes it as an

EV below $29,900 & Revolutionary! We are currently working full speed on re-defining how to make an inexpensive car. Reducing parts, make them simpler. Adding technology & unique features to replace tradition! I expect, we will show a PEAR prototype earlier than I originally stated.

He originally stated that that a Pear prototype would be shown in 2023, now he’s probably suggesting we could see it this year. Fisker has been working on the prototype since 2020, so it’s over a year in the making now.

We’ve seen some outlets branding the Pear a crossover, but it doesn’t look like one in any of the teasers. From all available angles, it looks like a hunkered down vehicle with not that much ground clearance, although the vehicle in the teaser may be a design study and not the finished product.

It wouldn’t be the first time the internet misjudged the body style of a vehicle from a Fisker teaser. We all thought the Fisker Ronin was a sporty sedan, which it really appeared to be from the first images released, but then Henrik Fisker had to publish another image showing that the vehicle was, quite surprisingly, a four-door convertible…