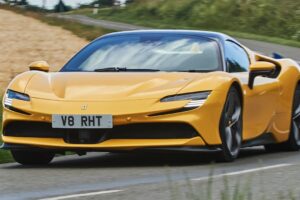 The greatest Ferrari? No, but there are more times than not when it’s certainly one of the most exciting.