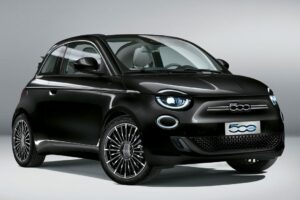 Fiat has collaborated with revered Italian tenor Andrea Bocelli to create a new version of its electric 500 city car, equipped with a bespoke JBL stereo system

Fiat has unveiled the 500 La Prima by Bocelli, a new special edition version of its popular electric city car designed to provide a much improved audio experience. It has been created in collaboration with popular Italian tenor Andrea Bocelli, and features a new 320W JBL audio system developed with input from the man himself.

The car is based on the 500’s range-topping La Prima trim, featuring a front-axle mounted 116bhp motor powered by a 42kWh battery pack. The La Prima completes the 0-62mph sprint in nine seconds, and goes on to a top speed of 93mph. It can cover up to 199 miles on a single charge, and topping up the battery to 80% takes 35 minutes via a DC fast charger thanks to 80kW rapid recharge capability.

Available in the same six paint colours as the standard car, the special edition doesn’t feature significant styling additions, and the 500’s pert, retro proportions are unchanged. A La Prima badge marks out the car, and there’s a set of LED headlights and 17-inch diamond cut alloy wheels. For bite-sized drop top motoring, buyers can also opt for a convertible version with a fold away fabric roof.

The cabin is largely unchanged, too, with a swooping dashboard trimmed in woven fabric and dominated by a central 10.25-inch touchscreen. A digital instrument panel hides behind the same slender two-spoke steering wheel.

The seats are finished in ice beige upholstery with stitched Fiat graphics, but the biggest draw of the La Prima by Bocelli edition is its new JBL stereo. It’s a 320W setup featuring the audio firm’s Virtue Venues technology – a first for a city car – and Fiat enlisted Andrea Bocelli to test the system ahead of the car’s launch.

The 500 La Prima by Bocelli edition will be available to order in spring, with pricing soon to be confirmed – we expect a small premium over the current range-topping 500, which is priced at £30,835.