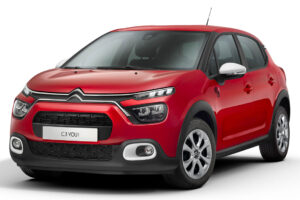 Citroen has added a new member to its C3 supermini line-up, representing a new entry-point to the range.

Called C3 You, it’s priced from £12,995 and targets buyers who might have looked at the brand’s former C1 city car, which is no longer on sale. As such, the C3 You’s starting price significantly undercuts entry-level versions of key rivals, such as the Ford Fiesta and Vauxhall Corsa, while making the supermini competitive with cars from the smaller city car class.

At £12,995 the price of the C3 You is cheaper than a handful of cars from the segment below, such as the Hyundai i10, the Volkswagen up!, and the new Toyota Aygo X. It also means that Citroen now offers a closer rival for the Dacia Sandero.

The C3 You is powered by a 1.2-litre three-cylinder petrol engine developing 82bhp, which sends drive to the front wheels through a five-speed manual transmission. Standard equipment includes LED headlights, cruise control with a speed limiter function, and a DAB radio with a five-inch touchscreen infotainment system.

Design touches include the fitment of a white styling pack, a matt finish for the B-pillars and chrome surrounds for the headlights. Soft Sand metallic paint is offered by default, with five optional colours at a cost.

Citroen plans to sell the C3 You exclusively online, via the Citroen Store.