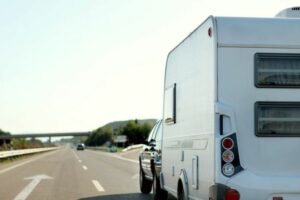 Shane Malpass, spokesperson for We Buy Any Motorcaravan said there was “no reason to say why the new laws “wouldn’t get delayed” into next year. However, he has pushed for the DVSA to make a “quick” decision on the caravan rules as it was “getting hard” for owners to understand.

He said the delay had put “a lot of people’s lives on hold” desperate to know when the new rule would launch.

When asked if the DVSA could introduce the legislation next year, Mr Malpass replied that it could be further delayed.

He told Express.co.uk: “Their phrase is it’s going to get down by the end of the year but as soon as possible

“There’s no reason to say why it wouldn’t get delayed.

“It’s just leaving it for the powers at be to make a decision.

“But for everyone sake, I hope they make it quick as it’s getting hard for some people out there to work out what’s happening going forward.”

He added: “If it didn’t go through and it went back to what it was before it would obviously be a nightmare.

“But there are a lot of people’s lives on hold just waiting for this to happen one way or another.

“There’s no reason to keep holding onto this and keep delaying it and delaying it.”

The DVSA’s new trailer rules would have allowed drivers who passed their test after 1 January 1997 to tow heavier weights.