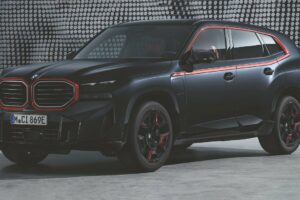 BMW has only just revealed the new XM, but the firm may have given us an early preview of the hotter Label Red version ahead of its release in 2023. BMW Austria posted several images of the XM variant, with some key differences to the regular car.

The Munich manufacturer hasn’t said what the XM Label Red will look like, but from the image it appears it’ll essentially be the same as the regular car, albeit with red accents around the grille, window line, shoulder line and within a new set of alloy wheels.

BMW says the new BMW XM Label Red will launch in Autumn 2023, the name itself hasn’t been seen before on a BMW. It will also be a road-legal production car, although it’s not known if production numbers will be limited for this more powerful version.

The regular XM already comes with 644bhp and 800Nm of torque, making it more powerful than a Lamborghini Huracan STO and Porsche 911 Turbo S. BMW has tweaked the twin-turbocharged 4.4-litre V8 in the Label Red variant to produce over 100bhp more than in the standard XM, so it puts out 578bhp and 750Nm of torque. The engine, however, is coupled with a plug-in hybrid system, resulting in a total of 740bhp and 1,000Nm of torque. Power will be sent through an eight-speed automatic transmission to all four wheels.

BMW hasn’t divulged any performance statistics, but the Label Red will certainly beat the XM’s 0-62mph time of 4.3 seconds and 168mph top speed. It’s not known if the Label Red will follow the design ethos laid out by the likes of the M4 CSL and M5 CS which removes some weight while stiffening the chassis.

With the extra focus on power, the Label Red could potentially lose some of the XM’s 55-mile pure-electric range offered by the 25.7kWh battery. We expect some revisions to the styling but nothing drastic given the SUV base.

Given the costs associated with developing a bespoke car, further variants of the XM could be possible to help offset its development costs. Alongside the Label Red a Label Black has also been rumoured to be in the works.