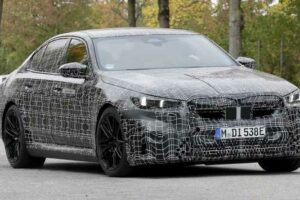 This is our best look yet at the all-new BMW M5, due to make its full debut in 2024. Thanks to a hybrid powertrain, BMW’s upcoming super saloon could be its most powerful model ever.

We’ve already seen the next-generation 5 Series (codenamed G60) testing many times, which is not surprising given the regular car will be released a year before the full-fat M5 version. As these latest spy pictures show, the M5 will retain plenty of design cues from the standard car.

With less camouflage than on previous test cars, we can see BMW has decided to shrink the kidney grille to place it more in line with the headlight units. The headlights themselves won’t adopt the split design seen on the latest 7 Series and XM, going for a similar look to the new X1.

Although the lower part of the front bumper is still shrouded in camouflage, we expect to see large air intakes at the side to help feed air to the front brakes, plus a lower grille for radiator cooling. The bonnet appears to have a plate welded to the front, which could potentially cover an indent flowing from the BMW badge – in a similar vein to the M3 and M4.

To the side, we can see wider arches to house the larger wheels. BMW M division’s traditional wing mirror design can be seen on this test car. To the rear, this is the first time we’ve seen the rear light clusters of the new 5 Series. The overall shape isn’t too far removed from the current car’s, with it divided between the fixed body and the bootlid. The classic quad-exhaust tips remain.

Our exclusive image gives a better indication of how the next BMW M5 will look. The M5’s usual aggressive, performance-focused detail will remain and we expect those new headlights will also employ laser light technology, and the car’s front wings will share a similar design to those on the new 2 Series.

The M5’s cabin will be all-new, and mostly borrowed from the upcoming replacement for the 5 Series. It’ll feature BMW’s iDrive 8 infotainment system with features such as 5G connectivity and an augmented-reality navigation system. Just like the iX, a 14.9-inch touchscreen with a 12.3-inch digital instrument panel on a single piece of curved glass will be used.

On the test car we’ve spotted there’s a small but significant label on the side stating “Electrified Vehicle”. That’s because the power on the new M5 will be hybridised, most likely coming from the new XM super-SUV.

In the XM, the 482bhp turbocharged 4.4-litre V8 produces and 194bhp electric motor combines to produce 644bhp and 800Nm of torque. Power is sent to all four wheels through an eight-speed automatic transmission. In the M5, however, we could see power bumped up to 748bhp if BMW decides to use the version set for the upcoming ‘Label Red’ variant.

The new M5 could even offer electric-only running thanks to the powertrain’s 25.7kWh battery. In the XM the system allows for 55 miles of EV-only motoring, which could increase in the M5 thanks to its more aerodynamic shape.