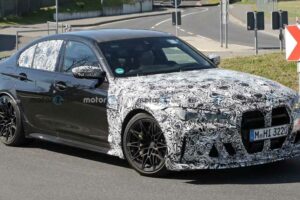 BMW is going big this year to celebrate its M division, which has been around for half a century. We will see the company launch several new M products in the coming months, and one of them might be the new BMW M3 CS. New spy photos capture the sedan back on and around the Nurburgring race track.

The latest photos also capture the sedan sitting alongside the M4 CSL that the company is also developing. The two will share front-end styling, with the pair receiving aggressive front fascias, unique grille inserts, special headlights, and deeper carbon-fiber spoilers.

BMW continues to hide the front fascia under a camouflage wrap, but it can’t hide all the inlets and openings for the potent engine. The car lacks any camouflage at the rear, revealing a familiar-looking design that houses the quad exhaust pipes in an aggressive diffuser.

The M3 CS will get its power from BMW’s twin-turbocharged 3.0-liter straight-six engine that propels the M3, and BMW will tune it to produce 540 horsepower (402 kilowatts). However, BMW will only pair it with the automatic gearbox and all-wheel drive. BMW will also improve the car’s overall performance by reducing the car’s weight through the extensive use of carbon fiber, and it may go as far as offering a rear-seat delete option.

Carbon fiber could also find its way into the M3 CS’s interior, where BMW will install its latest iDrive 8 infotainment software and dash-spanning display screens. The car’s camouflage over the rear windows suggests BMW tweaked something back there, though the car appears to sport rear-seat headrests. It’s difficult to discern.

The latest rumors suggest BMW will begin M3 CS production next March, which will run for just 11 months. BMW hasn’t said when we’d see the new M3 variant, but the company is going all out this year to celebrate 50 years of BMW’s M division. This year will see the M3 Touring, the M2, and the M4 CSL debut, and the M3 CS seems like the perfect companion to join the party.