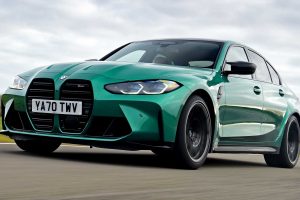 The new 503bhp BMW M3 Competition is here – will it be able to live up to its badge?