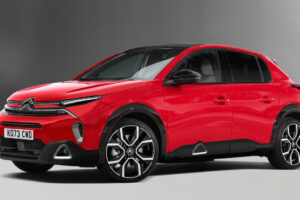 The new Citroen C3 will get an all-electric variant, courtesy of a new platform from Stellantis

Citroen’s pure-electric car line-up currently stands at one with the e-C4 (discounting the van-based e-Berlingo MPV), but soon broadening the firm’s EV range will be an electric version of the next C3. We expect it to be named ‘e-C3’, mirroring the format of the e-C4 nameplate.

The third-generation C3 has been with us since 2016 and is based on the old PF1 platform from the now defunct PSA Group. Electrification of the C3’s powertrain hasn’t been possible, but now Citroen is looking to Stellantis for the architecture of the next C3. Citroen is potentially aiming for a 2023 release of the new C3, ahead of the SUV Aircross version.

The CMP platform that underpins Stellanis Group cars such as the Vauxhall Corsa and Peugeot 208 will make its way onto the new C3 supermini. This means an all-electric ‘e-C3’ model will be viable, utilising the same tech from the Corsa-e and e-208. The 50kWh battery-based powertrain from those cars isn’t likely to be changed if it features in the e-C3, so we can expect 134bhp and a range of around 225 miles (Peugeot unlocked an extra 14 miles of range in 2022).

Arnaud Ribault, Citroen’s European boss, confirmed the use of the CMP platform and explained the decision behind it. “The work we are doing now is to decrease the costs or to be capable of compensating for the increasing cost of raw materials and electrification in all the projects we are developing.”

There will be a focus on providing a more budget-friendly alternative to the likes of Vauxhall and the Peugeot with the new e-C3, so we can expect pricing to undercut the Corsa-e’s £27,055 starting figure. There will also be a cheaper internal-combustion engined version, making use of the widely used Puretech 1.2-litre three-cylinder petrol unit we see in other Stellantis Group cars plus the current C3.

In terms of design, the new C3 will take inspiration from the recently revised C5 Aircross and our exclusive render depicts how the new car could look when it arrives. At the front, the angular headlight design has been seen on other Citroens recently, as has the lighting effect on the double-stacked grille. There’s a blacked-out wheel arch, just like the current C3, to give it a chunkier stance, along with Citroen’s ‘Airbumps’ on the side.

Stellantis announced its plan earlier this year that it will be going fully electric in Europe by 2026. This means the petrol variants of the new Citroen C3 will have a short lifespan, but the e-C3 will be able to continue on.