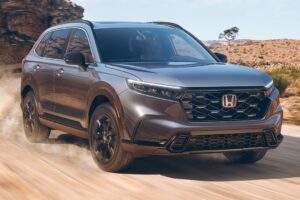 Honda has given its CR-V SUV a facelift, revealed for the US market ahead of an anticipated arrival in the UK next year with some spec changes. The sixth-generation version of the brand’s mid-sized SUV sports a cleaner design, refreshed underpinnings and a new hybrid powertrain to take the fight to the Mazda CX-5, Toyota RAV4 and Hyundai Tucson.

Based on a new, stiffer platform, the CR-V has a longer wheelbase and wider front and rear tracks than before, with Honda promising superior ride, handling and refinement to the outgoing car. Outside, the new CR-V adopts the firm’s new, simplified design language – albeit with a few rugged touches.

A large front grille takes centre stage at the front, which features a hexagonal mesh pattern and blends into a pair of LED headlamps. The front bumper is clad in black plastic body protection and silver trim, which extends to the wheel arches and side sills. The rest of the design is largely fuss-free, with a single sharp shoulder crease along the flanks and a subtle roof spoiler, with more chunky body protection at the rear.

The larger dimensions have liberated more boot space and an extra 1.5cm of legroom, while Honda has reconfigured the A-pillars and door mirrors to improve outward visibility. The interior draws heavily from the new Civic hatchback, borrowing that car’s overall dash layout with a strip of honeycomb mesh spanning the dashboard and a set of physical climate controls.

The new CR-V takes a significant leap in terms of tech. There’s a 7-inch digital instrument panel behind the steering wheel and a revamped infotainment setup, centering around a dashboard mounted touchscreen. This runs Honda’s own tile-based UI, although Apple CarPlay and Android Auto are also available. A 7-inch screen is fitted as standard, with a larger 9-inch unit optional.

A wireless smartphone charging pad is standard on more expensive models in the US, although exact equipment levels for the UK remain unknown – a European market reveal will come later down the line. Still, there’s a smattering of USB ports for charging mobile devices and a 12-speaker Bose stereo, which could make its way to high-spec cars in Europe.

Under the bonnet, the CR-V is fitted with a hybrid powertrain derived from the eleventh-generation Civic, which combines a 2.0-litre four-cylinder petrol engine with two electric motors to produce 201bhp. That’s 20bhp more than the Civic – useful given the CR-V’s additional bulk – although power figures may differ slightly for the UK version.

Honda claims that the car’s CVT gearbox can mimic conventional gear changes to avoid constant high revs under acceleration, with the car topping out at 115mph. The new CR-V is also available with a pure-petrol option in the US, but this won’t be available in the UK, where we expect a brand new plug-in hybrid option to join the line-up instead.

Hill descent control and a new ‘Snow’ driving mode should give the CR-V added ability in slippery conditions, and the car is equipped with Honda’s latest suite of driver assist systems. These include traffic jam assist, low speed braking control, traffic sign recognition and a slicker adaptive cruise control system.

Now read our full review of the Honda CR-V…