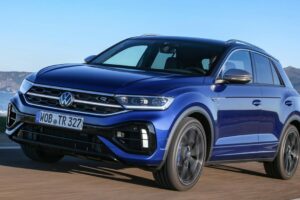 The Volkswagen T-Roc has been updated for 2022 and hot on its heels is the sporty T-Roc R variant. Starting from £41,750, the new car has received a subtle makeover on the outside, along with some updates to the interior.

A hot SUV rival to the likes of the Mercedes-AMG GLA 35 and the upcoming BMW X1 M35i, the T-Roc R also faces competition from within the VW Group stable in the shape of the Cupra Fomentor and Audi SQ2. The T-Roc R first launched in 2019, two years after the base T-Roc model. We haven’t had to wait that long after the standard model’s facelift in 2021 for the update T-Roc R.

The styling tweaks to the exterior are minimal but the front end receives a new, single-bar grille with a revised mesh design, which features thicker chrome trim on its upper edge compared with the outgoing car.

The headlights remain integrated with the grille, and have been subtly restyled with a new LED light signature and the brand’s IQ.Light LED matrix system. The lower bumper has been redesigned, too, with a reshaped lower grille that incorporates a horizontal gloss black bar and a more aggressive look generally.

Inside the revised T-Roc R we see a new soft-touch dash which integrates a larger 10.25-inch touchscreen. The whole infotainment display has been lifted from the current Golf, so the controversial touch-sensitive sliders make an appearance. New controls also appear on the revised steering wheel. New seats and larger gearshift paddles should give it a sportier edge.

VW’s EA888 engine lifted from the Golf R returns, although it’s taken from the old Golf R model so it offers unchanged 296bhp and 400Nm of torque. The turbocharged four-cylinder is still potent enough to deliver a 0-62mph time of 4.9 seconds and a 155mph top speed. Should you wish to have a more extroverted soundtrack, a titanium exhaust from Akrapovič is an optional extra.

As before, the T-Roc R’s performance is aided by a seven-speed dual-clutch gearbox and VW’s 4Motion all-wheel drive system. It also sits 20mm lower on sport springs than the standard car.

Now check out the fastest SUVs in the world…