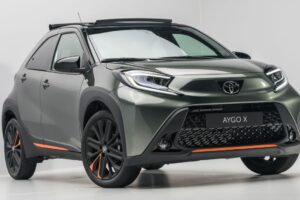 Orders will open for new Toyota Aygo X on December 1st, with first deliveries due in Spring 2022

Toyota has announced pricing and spec details for the new Aygo X – a replacement for the Aygo city car that sees it morph into a crossover.

The Kia Picanto rival will be available to order on December 1st, starting from £14,795 in base manual ‘Pure’ trim. That’s £875 more than today’s existing Aygo, but significantly more than an entry-level Picanto.

The range flagship is the Exclusive model. From £17,715, it comes with synthetic leather and cloth upholstery, a wireless phone charger, LED headlights, keyless entry and start, parking sensors and an even larger nine-inch HD touchscreen This brings cloud-based navigation, traffic data and other connective services, over-the-air updates, and wireless Apple CarPlay and Android Auto. A JBL sound system can be further optioned.

Finally, the Aygo X launches with a Limited Edition special variant, available for the car’s first six months on sale. From £19,640, it gets matt black alloys with orange highlights, orange detailing on the sills and bumpers, interior design tweaks and that electric canvas roof as standard. Heated part-leather seats and a special Cardamom green main paint colour also feature.

All Aygo Xs come with a 71bhp 1.0-litre three-cylinder petrol engine, which is mated to either a five-speed manual gearbox or, for an extra £1,100, a CVT automatic gearbox. Cars can be pre-ordered with a refundable £99 fee, while the Limited Edition model is exclusively online-only, First deliveries begin in the Spring.

The Aygo X launches at a time when rising costs and tightening rules on emissions have forced many manufacturers to abandon their smallest models. Toyota believes there’s a future in the city car, and it is aiming to capitalise on the thinning out of prospective rivals

Pronounced ‘Aygo Cross’ by Toyota, the new car’s name is designed to reflect a dramatic rethink on its body style. This is the first Aygo that hasn’t been a joint venture with Peugeot and Citroen (the two French brands are abandoning their 108 and C1 respectively), and Toyota has used this freedom to switch the car to a condensed version of its TNGA-B platform, the same architecture that supports the Yaris and Yaris Cross.

This move has also allowed the Japanese brand to make the car wider, extend its wheelbase and shift its body upwards to create what is possibly the first true ‘city car crossover’, with a raised driving position to match the usual SUV-esque styling cues, like thick plastic wheelarch cladding. The ratio of wheel size to body height also contributes to the stance.

The Aygo X’s overall profile does stick closely to that of the Prologue concept that was released earlier this year. The car is 3,700mm long, 235mm longer than the outgoing model and just over a centimetre longer than the current Kia Picanto.The wheelbase is up by 90mm, and the overall width increases by 125mm, along up to 45mm more shoulder room for the front-seat occupants.

The roofline sits 50mm taller than the old Aygo’s, and the seating position has been lifted by 55mm; Toyota claims that this, plus more sharply angled A-pillars, will give the driver improved visibility in urban driving.

Some of that increase in length has clearly been used to improve one of the old Aygo’s weakest areas: boot space. The new car’s capacity is 231 litres, a full 60 litres up on the outgoing generation and almost 50 litres clear of the load bay on offer in a Fiat 500. The Toyota’s seats can be folded down to free up an outright capacity of 829 litres.

The Aygo is sticking with conventional petrol power, as Toyota aims to keep the price point lower than those of small EVs while catering for city dwellers who don’t have access to charging points. The engine concerned is a further development of Toyota’s 1KR-FE 1.0-litre three-cylinder unit, producing 71bhp at 6,000rpm and 93Nm of torque at 4,400rpm. It’ll be offered with a choice of transmission. A five-speed manual gearbox will be standard, but the availability of a CVT automatic will also give the Aygo X extra city appeal.

Toyota bosses claim that the new powertrain is competitive with mild-hybrid rivals, and say there are no current plans to introduce an electrified version of the Aygo X. Andrea Carlucci, the company’s European vice-president of sales and marketing, told us, “We don’t exclude that in the future that some solution could come along, but we don’t believe we need it, for the time being. We shouldn’t forget that this segment is critical for us, and it remains the access point to the brand. Historically Aygo is an affordable car and it must continue to be that.”

However, Stijn Peeters, project leader for the Aygo X, admitted that the Yaris’s hybrid tech could, in theory, be fitted to the car. “It’s definitely an interesting option to study,” he said. “It’s a TNGA platform, so it could fit. But conceptually you’d have to rethink the whole car, finding places to store the battery, for example, without giving up luggage space. It would also increase weight and cost, so it would make it a completely different car.”

At the other end of the spectrum, Carlucci admitted that the car “may deserve” a more focused performance edition, perhaps forming part of the GR Sport family. “Looking at the chassis, body rigidity, maybe there is the potential in making a more sporty version,” he told us. “It’s not in our plans, but never say never.”

Toyota referenced ‘spice’ when revealing the Prologue concept, and that theme is being extended to the names of the production car’s colour treatments. Cardamom brings green, Chilli is a deep metallic red with blue metallic flakes, Ginger introduces beige and Juniper is a new shade of blue with red undertones. All of these hues contrast with the bi-tone black treatment on the roof and rear panels.

The new Aygo X is designed for the European market exclusively. Toyota has taken full control of the Czech factory where the old model was manufactured alongside the 108 and C1, and it will make the Aygo X there, as well as the recently introduced Yaris Cross.