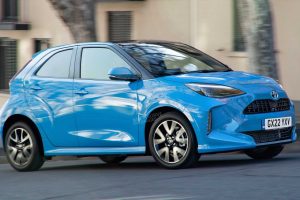 Toyota has confirmed it will commit to the city car market next year with the introduction of a new A-segment model – a third-generation Aygo – which will be built on the same platform as the latest Yaris and the new Yaris Cross SUV.

The brand is seeking to capitalise on key rivals abandoning the A-segment due to dwindling returns, tight margins and even tighter CO2 emissions targets. Toyota’s heavy hybrid presence means it has the leeway to produce a combustion engined small car with a much smaller risk of breaching fleet CO2 emissions legislation.

Despite a shrinking A-segment market, sales of the Aygo have remained solid across two generations, leading to 99,000 deliveries across Europe in 2019. It’s one of the continent’s most popular city cars.

City cars play a big role in Toyota’s European manufacturing operations, too. The Aygo has been built alongside the Peugeot 108 and Citroen C1 at a joint PSA-Toyota site in Kolin, Czech Republic, since 2005. In January 2021, Toyota acquired the plant in its entirety and continues to produce the current-generation Aygo alongside the 108 and C1 city cars for Peugeot and Citroen.

The brand has also already made big moves towards readying the factory for what comes next, when Citroen and Peugeot end their city car partnership with Toyota and the end of the current Aygo/C1/108 lifespan.

A £137m investment means that it’ll be a site ready to produce new cars on the GA-B version of the Japanese brand’s TNGA platform in the second half of 2021, and the number of cars the factory will be able to make per year will increase.

A lot of that new capacity will be handled by some production of the latest Yaris being moved to the refurbished plant. The next Aygo will almost certainly be made there on the same production line, enjoying similar economies of scale offered up to the previous-generation model by having another small car with many shared parts built alongside it.

Spy shots certainly confirm that an Aygo link-up with the Yaris is being planned. Prototype versions of the third-generation car reveal a strong resemblance between the two models from a design perspective, with the Aygo gaining the distinctive rear hips of the newest Yaris, and a front end ditching the X-shaped apron for the latest Yaris’s more conventional upper and lower grilles.

Some older Aygo parts and panels will be carried over and integrated into the new model though. For instance, the rear bumper and vertical taillights spied on the latest Aygo prototypes are lifted from the current model, reducing the development costs of the new city car further.

While Toyota’s only official image of the new car is a snapshot of its platform, our exclusive images preview how the new Aygo could look on roads when it launches later in 2021.

Despite usage of some older Aygo panels and parts, the move to the GA-B platform means that an all-new interior with Yaris inspiration is a strong possibility. Expect Yaris switchgear to make an appearance across the new-look cabin, with the old car’s plain central stack swapped for a neater centre console with a floating style touchscreen system.

As for engines, Toyota’s wide-reaching electrification is possible given the usage of the GA-B platform, but is unlikely to be a part of the Aygo’s engine mix from launch. Instead, pure petrol power and a more affordable price tag will be the priorities, with Toyota likely to use an updated version of the old car’s 1.0-litre three-cylinder unit, or the 1.5-litre engine in the Yaris without electric assistance, which would develop 90bhp.

With prototypes looking in the latter stages of development, and Toyota now confirming its plans to re-enter the A-segment, a reveal in the coming weeks and a market launch towards the end of the 2021 seems likely, with the starting price of the new Aygo to climb to around £14,000, indicative of its new platform and updated technology.

What will the new Toyota Aygo have to beat? These are the best city cars on sale right now…