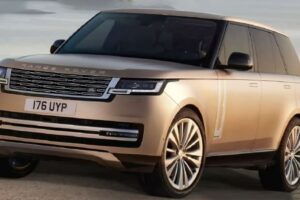 The new Range Rover will be officially revealed from 8.40pm tonight, although leaked images have already appeared on social media

The all-new fifth-generation Range Rover is due to be revealed from 8.40pm this evening, although leaked images of what could be Land Rover's latest flagship SUV are circulating on social media and may offer up an early glimpse at the new car’s styling inside and out.

Numerous spy shots of the Mercedes GLS and BMW X7 rival have pointed to an evolutionary design language. Based on these images that would certainly tally with the similar front-end shape, grille and headlight arrangement as used on the current generation Range Rover family. The surfacing appears far smoother than before though.

The car’s imposing two-box profile remains, as does a strong shoulder line and a new interpretation of the vertical detailing found on the front door near the A-pillar. The rear end of the car transforms though, with what looks like a new full-width taillight on the tailgate, featuring vertical lighting clusters on the rear corners of the car.

Many of Land Rover’s recent models have moved over to the new 11.4-inch Pivi Pro touchscreen infotainment system, and the new Range Rover looks to follow suit inside, integrating the brand’s latest infotainment technology into a dashboard following the similarly evolutionary styling embraced by the front end.

We already know that the new Range Rover will be the first Land Rover on the brand’s new MLA Flex platform, which has been designed to accept combustion-engined, plug-in hybrid and fully electric powertrains. It’ll be one of three cars that we know will utilise Land Rover’s new MLA Flex system, the others being the all-new Range Rover crossover and the next Range Rover Sport.

We may have to wait a while before we see a fully-electric Range Rover – we anticipate that it will arrive in 2024, some two and a bit years after the new internal combustion engine and plug-in hybrid versions of the Mk5 Range Rover arrive on UK roads.

It’s long been rumoured that Land Rover will utilise BMW power in the new Range Rover, with the 5.0-litre supercharged V8 option with up to 557bhp in the Range Rover SVAutobiograhy and across numerous JLR products on its way out. Instead, the more modern 4.4-litre turbocharged V8 used in xDrive 50i versions of the X5 and X7 SUVs will find a new home under the bonnet of the British model.

Six-cylinder diesel units from the outgoing car with mild-hybrid assistance will likely be carried over, though it’s unknown at present if the Range Rover’s expanded plug-in hybrid technology will make use of a new powertrain compared with the outgoing car’s P400e option, backed by four-cylinder petrol power alongside a battery and an electric motor.

Past and current iterations of the Range Rover have offered buyers a spacious layout with luxurious accommodation for five adults, and that will remain the case with this new model. Long-wheelbase versions should also give buyers the option of an executive seating pack for the second row, which adds two larger rear seats that have a far greater range of adjustability for added comfort.

Full details and images will be revealed tonight, and orders will open when it makes its debut. First deliveries won’t take place until spring 2022 at the earliest, with prices likely to begin from more than £90,000.

Are you looking forward to seeing a new Range Rover? Let us know your thoughts in the comments below…