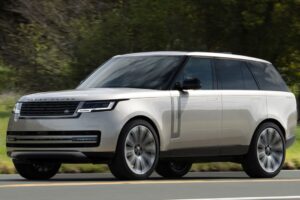 The higher cost of the new Range Rover hasn’t deterred buyers, with Land Rover already banking 10,000 orders in the UK, stretching the waiting list to a year

The new 2022 Range Rover has taken noticeable steps forward in terms of luxury, refinement and quality, and so have prices, but at least 10,000 people have paid no heed to the increased cost by placing an order.

Jaguar Land Rover UK managing director Rawdon Glover noted at the UK launch that the average specced-out price of a fifth-generation ‘L460’ Range Rover sold in the country is £125,000, a huge increase over the £100,000 average for the outgoing ‘L405’.

Glover added: “We’ve got about 10,000 orders we’re looking to fulfil in the UK, and reaction globally has been equally as strong. So we’ve got about a 12-month waiting list, which is probably about as far as I’d want that to go.”

Glover talked of freeing up additional production volume “because we probably don’t have sufficient capacity to fulfil all the demand across the globe,” although Land Rover doesn’t want to go too far in this regard. “Scarceness and rarity are two qualities that you absolutely associate with modern luxury, so we need to make sure we never get to the point where it’s over-supplied. But getting that balance right for lead times is key,” Glover explained.

He also thinks increased competition, along with the new Range Rover’s technology uplift, has helped justify the higher prices, particularly for the most expensive specs with high levels of personalisation. The Range Rover now has two luxurious rivals it didn’t have at the time of the L405’s launch – the Bentley Bentayga and the Rolls-Royce Cullinan, which Glover alluded to.

“The entrants above us that have come in – they’ve raised the ceiling in terms of customers’ aspirations in terms of how far they can go,” he said, adding, “We’ve had the first £200,000 Range Rover, and having that competitive set in there makes that a little more straightforward in terms of the customer’s ability to bespoke a car and have increased levels of luxury and refinement. In some respects, competition can be a good thing.”

Some of Land Rover’s most loyal customers were invited to see the car before its global unveiling via the company’s Inside Track scheme. Glover said that those who were later given the opportunity to drive it were “blown away by the additional refinement, and the evolution in terms of the handling”.

Around 40 per cent of buyers have opted for diesel engines, 35 per cent chose petrol, and the remaining quarter settled on plug-in hybrid models. The new seven-seat option has proven popular, with around 50 per cent selecting it.