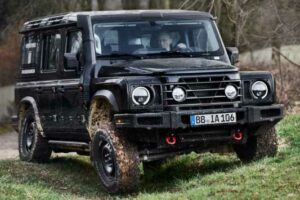 Order books have opened for the Ineos Grenadier, with the beefy utilitarian SUV costing from £49,000

Ineos is now one step closer to delivering its Grenadier 4×4 to customers. The new, Land Rover Defender-inspired SUV is now available to order, with prices starting at £49,000. Those who have previously reserved a build spot can now finalise the spec of their Grenadier through the firm’s new configurator and complete their order.

Buyers can choose from an entry-level ‘Utility Wagon’ two-seat model as well as a £52,000 ‘Station Wagon’ five-seater. Ineos also offers two pre-configured Grenadiers called the ‘Trialmaster’ and the ‘Fieldmaster’, both priced from £59,000. The firm says the Trialmaster has been ‘specified with extreme off-roading in mind’ and the Fieldmaster ‘is designed for those with an adventure lifestyle’.

There are further customisation options, such as a raised off-road air intake, rock sliders and a heavy duty winch. Buyers can also opt for a roof rack and a front LED light bar for extra cost.

The French-built, Austrian-engineered and British-conceived new 4×4 – evoking memories of the original Land Rover Defender – should reach customers from the end of this year, with production starting in July 2022. Production will take place at the firm’s Hambach plant, which was bought from Mercedes in 2020.

So far, Ineos has had 18,000 people register an interest in buying a Grenadier globally.

Ineous claims the Grenadier has a ground clearance of 264mm and a wading depth of 800mm.

Ineos has sourced two BMW engines to power the Grenadier. Both are 3.0-litre six-cylinder turbo units. There’s a diesel with 246bhp and 550Nm of torque, and a petrol engine with 281bhp and 450Nm. Pricing remains the same for each powertrain. The permanent four-wheel drive with shiftable low range and a central locking diff is Ineos’s own design, but power is transferred via an eight-speed ZF automatic gearbox. There’s also potential for a hydrogen-powered Grenadier, with Ineos hoping to test the technology in its 4×4 this year after a £1.7bn investment.

All models will feature the same centre stack of toggle switches and an overhead row of toggle switches on the headlining. This will be home to functions such as the front and rear electronic differential locks, while the centre diff lock is operated manually via a lever on the centre console next to the BMW-sourced gear selector.

Alongside the BMW-sourced powertrains, Ineos Automotive has sourced the infotainment system from the German brand, with the 12.3-inch touchscreen (also controlled through a rotary dial on the transmission tunnel) uses BMW’s operating system. However, the Grenadier’s graphics are bespoke.