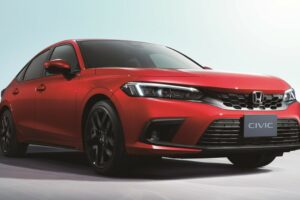 Honda has revealed the new eleventh-generation Civic hatchback for Europe, which arrives following the reveal of the four-door saloon model already on sale in the United States.

This new Civic will be offered exclusively with a hybrid powertrain, with the core Civic line-up turning towards electrification as part of Honda’s mission to electrify all of its European models by 2025.

In a blow for UK manufacturing, this will also be the first Civic on sale in Britain, but not built here, since the introduction of the fifth-generation car in 1994. The brand’s Swindon plant has been sold to new owners. Production of the Mk10 model will cease next month and with it Honda will end 36 years of car and engine manufacturing in Britain and the EU.

This new Mk11 car will be built in Japan, likely using an evolution of the Mk10 car’s platform.

No specs have been revealed but Honda has confirmed that the e:HEV hybrid system already deployed in the Jazz supermini, the new CR-V and soon to launch in the HR-V will be standard across all variants.

Two versions of the e:HEV hybrid drivetrain have been used in the Jazz, the HR-V and the CR-V. The Jazz supermini and the HR-V crossover both make use of a 1.5-litre four-cylinder petrol engine. The motor is used to charge a small battery pack feeding two electric motors. All-electric running over short distances, hybrid running, and propulsion from the petrol engine are all possible.

In the Jazz, the system develops 108bhp, with the HR-V’s e:HEV system producing 129bhp. More power is available in the larger CR-V, which uses a 2.0-litre four-cylinder engine with a battery and dual electric motor configuration rated at 181bhp.

Honda has only revealed exterior images of the new hatchback. The design borrows heavily from its saloon sibling, using the same new front end with a more horizontally aligned look than before.

The nose is squarer and is flanked by flatter LED headlights. The upper grille is smaller, though the grille section on the lower apron grows in size. The position of the A-pillar moves backwards to give the impression of a larger bonnet.

Moving down the sides, a strong character line runs from the bonnet to the new look tail-lights, integrated into a sleek, almost fastback-like rear end with a small lip spoiler at the bottom of the windscreen.

Honda has not revealed any interior images, but based on the US-spec car we can expect a total overhaul inside. A new, de-cluttered dashboard arrives with a long, horizontal theme for the dash containing the ventilation and switchgear. There’s also a new floating style touchscreen infotainment system. The standard unit sizes up at seven inches, with a nine-inch system optional. Honda says the new system comes with simpler menus and wireless Apple CarPlay and Android Auto connectivity.

It’s joined by fully digital instrumentation for the first time in the Civic. A new customisable 10.2-inch digital instrument cluster sits behind a redesigned steering wheel, but entry-level versions of the Civic use a seven-inch cluster, which retains an analogue speedometer.

The brand has claimed it uses higher quality interior materials in the US-spec car, especially on touchpoints, while the seats have been redesigned too.

Full details including engine specifications and the interior of the European-spec Civic hatchback will be revealed over the coming months. There will be some wait, however, as Honda has confirmed that the car won’t arrive on roads in Europe until Autumn 2022.

Now read our list of the Best family cars on sale…