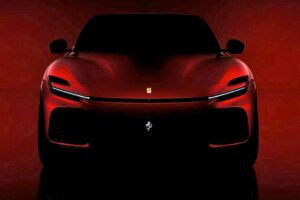 The Ferrari Purosangue will be the brand’s first-ever SUV, and will receive the bombastic V12 engine from its flagship sports cars

Ferrari has revealed that its eagerly anticipated Purosangue SUV will be powered by its legendary naturally aspirated V12. The Italian firm released a teaser video to announce that its first ever SUV model will arrive later in 2022, while Ferrari CEO Benedetto Vigna told Reuters that the car will adopt the firm’s famed V12 engine.

“We’ve tested several options, it was clear that the V12, for the performance and driving experience it could provide, was the right option for the market,” he said.

The decision means that the Purosangue will stand apart from sporty SUV rivals like the Aston Martin DBX, Lamborghini Urus and the Porsche Cayenne Turbo GT, which all use turbocharged V8s.

Footage of the Purosangue’s engine indicates that the intake plenum will be redesigned compared to that of the 812 Superfast coupe and, of course, the exhaust system will be bespoke. If the SUV’s engine is otherwise identical to the 812, it will be a 6.5-litre unit that produces almost 800bhp and is capable of revving to nearly 9,000rpm redline.

We’ve already seen leaked images of the car’s design, which were confirmed to be accurate by an official teaser of the SUV. The leaks show the front and rear of the car at the Maranello factory, revealing key design details and influence from other Ferrari models.

The headlights look to be an even more dramatic interpretation of the units that feature on the Roma GT, with a slash extending out from the car’s nose and into the light clusters. The bonnet looks to be a clamshell and the gaping grille is positioned low into the front bumper.

A Ferrari shield sits on the front wings (likely optional) and the bottom of the door and sill are heavily sculpted, curving in towards the middle of the car to hide some of the machine’s visual mass.

As we’ve seen with spy shots, the rear of the car features quad exhausts and a rather modest diffuser. There are vents behind the rear wheels and the rear lights are similar to those of the recently unveiled 296 GTB.

We can expect Ferrari’s first SUV to debut later this year, with deliveries of the Purosangue commencing in 2023. The company’s marketeers describe the Purosangue as a “Ferrari Utility Vehicle.” Our recent spy shots (which show the car in its production bodywork) suggest it’ll be anything but utilitarian, though, as it has a relatively low ride-height and a low-slung silhouette.

Whereas the DBX and the Urus sit tall and upright with relatively short overhangs, the Purosangue has a long bonnet, a steeply raked windscreen and a fairly long wheelbase.

The rear overhang is also extensive, while the rear wheels appear to be a little larger in diameter than the fronts – just like a supercar. However, that could just be a quirk of the way the prototype has been set up.

Because it rides so low, we expect Ferrari will fit the Purosangue with ride height-adjustable air suspension. Quad-exit exhausts are also visible on this prototype, as are a set of enormous cross-drilled brake discs and huge callipers.

Our exclusive images show how the finished Purosangue could look once the camouflage is pulled off. We expect it’ll draw on the Roma GT car for some design inspiration, sharing the same bonnet lines, grille shape and flared haunches.

While the Purosangue’s styling doesn’t point towards it being particularly practical – in the SUV world, at least – it’ll be the most spacious model in Ferrari’s line-up. There’s a four-door, four-seat layout and a hatchback tailgate.

In essence, then, the SUV will become an indirect replacement for the GTC4 Lusso four-seat coupe, which Ferrari pulled from its price list at the end of 2020.

Ferrari has already confirmed that the Purosangue will be based on the same platform as the Roma GT, so that car’s 3.9-litre V8 could also join the lineup.

In the grand touring coupe, the unit produces 612bhp and 760Nm of torque, and given the amount of extra space available in the Purosangue’s body, Ferrari could shift away from the Roma’s rear-drive layout and move instead to a four-wheel drive set-up. The SF90 Stradale’s more powerful V8 hybrid setup could be on the cards, too

Former Chief Technology Officer Michael Leiters told us: “In general, we will have two families of architecture – front and rear-engine families.

“The modularity is there and, especially on the front-engined architecture, we have to foresee many more models. We have a 2+2, we have a 4+, we are thinking about Purosangue, and so on.”

Leiters also mentioned that the SUV’s platform is capable of accepting a V6, as well as the V8 and V12, which could take the form of the 296 GTB’s electrically assisted unit. In the mid-engined supercar, this produces 819bhp.

But while the V6 and V8 are the most likely candidates for electrical assistance, the combustion engine will be the sole means of propulsion in the V12 model. Combining such a heavy motor with an even heavier electric motor and battery pack is not favoured by the company’s engineers.

“The philosophy is to try to be ready with different technologies in order to use them with the necessary evolution,” he added. “That’s why we have a wide range of engines: V12, V8 and, in the future, the V6.”

Ferrari will unveil the Purosangue later this year, although the brand hasn’t yet confirmed a date for the car’s launch event. When the order books eventually open, we’re expecting prices to start from around £200,000.

Do you think the Ferrari Purosangue will be a success? Read our run-down of the best luxury SUVs here…