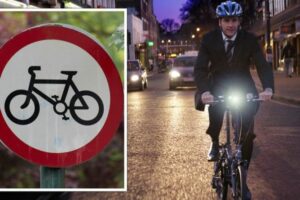 New driving laws are set to come into effect on January 29, and will see a number of rules being changed to create a “hierarchy of road users”. With this, cyclists and pedestrians are set to gain priority, with those that can cause the greatest harm, like cars and lorries, being given the greatest responsibility to reduce danger to others.

This is designed to protect the most vulnerable people on our roads and emphasise greater protections for those who are at the greatest risk.

One of the new changes is an extension of safe passing distances, as driving near to more vulnerable users when trying to overtake can represent a serious danger.

Peter Lorence, a serious injury lawyer at Irwin Mitchell, commented on the new changes and what drivers will need to do to remain safe on the road.

He said: “We’ve seen cases of people on bicycles being clipped by fast moving traffic, resulting in catastrophic injuries.

“We’ve also seen those cycling in our city centres be dragged under the wheels of vehicles that have attempted to pass them, but done so too closely.

“In addition, we have seen cases of horse riders and horses being hit by fast moving traffic, resulting in deaths and serious injury.

“Due to horses being flight animals that can move incredibly quickly if startled, close passing at speed can also pose dangers to riders and horses, even without an actual collision.

“This includes guiding on at least a 1.5 metre space when overtaking a cyclist at speeds of up to 30mph.

“More space is expected when overtaking at speeds in excess of 30mph.

“If when passing a pedestrian who is walking in the road, drivers are expected to allow at least two metres of space and to maintain a low speed.

“Extra care should be taken in poor weather.