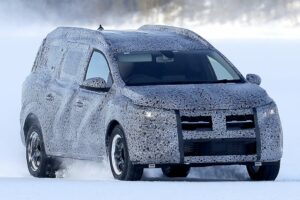 Dacia will launch a new MPV in the UK next year, expanding its range with a model that is all but certain to be the cheapest seven-seater on sale in British dealerships.

The value-focused Romanian brand has a number of people-carrier offerings – badged Dokker and Lodgy – but while they stretch across a range of global markets, UK customers have never been offered a full-blown Dacia MPV. While the Logan MCV estate, offered with space for seven in select markets, was sold in Britain as a five-seater only.

That will change in 2022, Dacia’s CEO has told Auto Express, when all three of these cars will be replaced by a single vehicle based on the same CMF-B platform that underpins the latest Sandero supermini.

“We’re going to replace the family of people-movers,” Denis le Vot revealed to us. “What we now call Dokker, Lodgy and Logan MCV will be moving to CMF-B so we will be launching, sometime next year, the replacement of these three cars. It will be a modern C-segment proposal that will include seven-seaters.”

When asked directly if British customers would be offered the new model, le Vot replied, “Yes, it will be in the UK – definitely. I think in the UK market, maybe we have missed something so I’m really going to work on this area. People who happen to know us there stay with us; the loyalty is the highest. But we need to increase the number of people who would consider buying from us.”

Auto Express understands that the UK versions of the car will arrive at the same time as the main European launch, which should be in the second half of 2022. The confirmation follows spy pictures, taken earlier this year, that showed right-hand-drive versions of a Dacia MPV undergoing winter testing.

In France, the existing Lodgy is offered from 15,000 euros (£13,000) in five-seat form. Even accounting for some currency fluctuations, a price of £15k would significantly undercut commercial vehicle-based MPVs like the Citroen Berlingo and Peugeot Rifter.

The Lodgy replacement is unlikely to be the only seven-seater in Dacia’s range in the medium term. The company will launch a 4.6 metre-long SUV in late 2024 or early 2025 and le Vot said the car, previewed by the Bigster concept, will have “at least five seats”.

Now read our review of the new Dacia Sandero Stepway. Let us know your thoughts in the comments below…