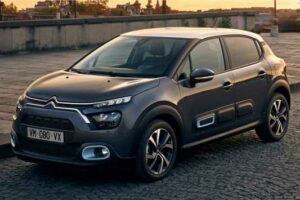 Citroen has collaborated with Elle magazine to produce a new variant of the C3 hatchback, featuring unique styling details

Citroen has added a new Elle trim level to the C3 line-up, created in partnership with the French fashion magazine. The new model gets two-tone paint, Alcantara upholstery and Elle-inspired details inside and out, with prices starting at £18,150. The C3 Elle is available to order now.

The fundamental design of the C3 remains unchanged, with the same rounded body shape, split headlights and air bumps along the flanks. However, the Elle gets a two-tone paint finish as standard, with a choice of five body colours combined with either a white or black roof.

There are also matte silver blue accents, which highlight elements such as the front fog light surrounds and side air bumps. Elle magazine’s ‘Since 1945 & forever’ slogan has also been applied to the roof, along with a black and white ribbon motif.

The matte silver blue detailing continues inside and the C3 Elle is equipped with Citroen’s Advanced Comfort seats trimmed in light grey fabric and alcantara. They also feature satin blue highlights on the backrests and there’s more Elle branding on the floor mats. An Alcantara dashboard is also unique to the new model.

Read our full review of the Citroen C3 here…