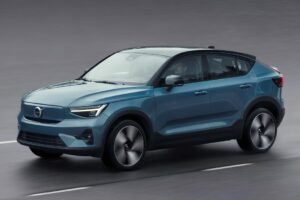 Volvo has named its price for the new C40 Recharge – the brand’s first purely electric model and the first to be sold solely over the web, which is available now from £57,400.

The brand scored a smash hit with its XC40 small SUV – and now the firm is hoping to score additional sales with the second of its new generation of 40-series models, which will rival everything from the Audi Q4 e-tron to the Tesla Model 3.

The C40 Recharge is a clear relative of the popular XC40, the pure-electric version of which became Volvo’s first EV offering at the end of last year. The C40’s front-end styling is very similar to the SUV’s, but its roofline tapers more sharply towards the rear, giving it the overall stance of an elevated hatchback – a crossover – instead of a 4×4. Despite this, its floor height and seating position will be raised like in the XC40; the company says it will “provide customers with the high seating position that most Volvo drivers prefer”.

The biggest difference in design comes at the C40’s tail, which has a new horizontal light treatment and a small roof spoiler.

The C40 shares the XC40’s CMA platform and some of its key dimensions – notably the wheelbase, which is identical. Indeed, Volvo quotes the same rear legroom figures for both cars, although the C40’s more aggressive roofline cuts around 6cm off the amount of headroom on offer to rear passengers. The crossover’s boot capacity of 413 litres is the same as the SUV’s, however – and it also offers the same ‘frunk’ area under the bonnet; the additional 31 litres of capacity an ideal place to store the charging cables.

The new arrival is being launched with the XC40 P8 powertrain. This means a pair of electric motors, one on each axle, producing a combined output of 402bhp and 660Nm of torque. That’s enough to take the C40 Recharge from 0-62mph in 4.9 seconds and on to a limited top speed of 112mph.

The C40’s battery capacity is 78kWh (75kWh usable), and Volvo says that this will deliver a WLTP range of 420km, or 261 miles. The firm also states, however, that it expects this range to improve over time, due to over-the-air software updates. The maximum charging rate is 150kW, allowing the battery to be replenished from zero to 80 per cent in 40 minutes.

Like the XC40 Recharge, the heart of the C40’s cabin will be an infotainment system powered by Android Automotive – bringing Google Maps for navigation and, should you allow it, seamless integration with your personal data. Volvo hasn’t issued any images of the cabin but it should look very similar to the XC40’s – although we do know that the C40 will be the first model offered by the manufacturer without even the option of leather upholstery.

The P8 version of the C40 is on sale now, and Volvo customers can place their order online, with three buying methods offered up.

On list price, the C40 Recharge is available from £57,400 including insurance, maintenance and servicing for three years. Buyers can place a £500 deposit now, and pay the rest on delivery later in the year.

There are two subscription options as well: flexible and fixed, both with no deposit and including servicing and maintenance. The flexible contract is available from £879 a month and serves owners the option to give Volvo three-months notice if they wish to end the contract or change into a different vehicle, and also includes a 30-day trial period at the start of the contract.

Those willing to commit to the car on a subscription basis can do so with the fixed 36 month tariff, which costs from £729 a month.

Volvo officials have admitted to Auto Express in recent months that more modest powertrains are already in the pipeline for the XC40, helping to reduce price for those who want less performance or, potentially, a smaller battery with more limited range. It’s all but certain that these motor and battery set-ups will also be offered on the C40, in time – although for now at least, Volvo says that it is planning to offer the car with a more limited line-up of variants, to make it easier to configure and order.

The C40 will be built alongside the XC40 in Ghent, Belgium, and production will start in the autumn. Volvo should start taking orders in the UK this summer, but the first deliveries to British customers aren’t likely until the start of 2022.

A. Often you think C40 is for younger customers but at the end of the day, lots of older people want to have them! You shouldn’t be too sure; maybe we’ll sell the first C40 maybe to somebody in their seventies! You never know. I think we shouldn’t exclude anybody. Tastes are different. And a lot of older people, empty nesters, they really don’t need a bigger car. For them. XC40 and C40 are ideal cars. Everybody is welcome.

Q. The XC40 and C40 are both being launched with twin-motor, high-powered configurations that make them quite expensive. When might we see more modest, more affordable versions of these EVs?

A. We don’t have a confirmed plan. Of course, if we want to move to expand the sales volumes, we will need a lower price point. That would be natural. Right now, yes, we are starting with twin-engined versions of both of those cars, and they are delivering fantastic performance. Wouldn’t exclude the lower price points; they will come later.

Q. Has this announcement on electrification and the reveal of the C40 actually changed anything in your product plans? Have you had to adapt any model plans or even cancel anything?

A. Traditionally we have had sedans (saloons), wagons (estate) and SUVs. Now there is close to 75 per cent of our sales as SUVs. That shows we need more SUVs. The C40 is, in a way, a type of SUV vehicle, with a high seating position.

We need to expand even more there. We’re planning an even smaller SUV, lower than 40 series. So I would guess we need fewer variants of sedans and wagons. We have a lot of wagons today – 60, 90, Cross-Country, non-Cross-Country. We have sedans, big and small. We need to move it from wagons and sedans. Even though we will still have them, we will probably not have as many models. That’s the way we are working right now. That’s what we have in our development pipeline – going in that direction.

Q. So does that mean the end of the traditional Volvo estate?

A. Not necessarily. But it will be developed and streamlined also. But everybody who wants really practical car maybe doesn’t want a really high, off-road SUV type of vehicle. So a practical lower car could also be really interesting. Especially as we go electric, and need lower air resistance. Definitely don’t count out the wagon just yet.

What does the new Volvo C40 have to beat? These are the best electric cars on sale right now…