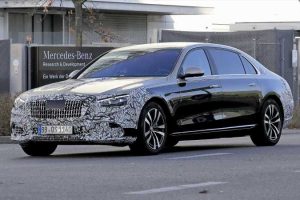 Mercedes-Maybach S-Class luxury limo has been spied again, this time cruising around the streets of Germany with a production paint job 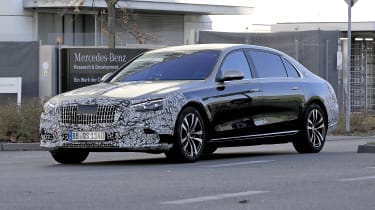 The next Mercedes-Maybach S-Class, has been spied again ahead of introduction in 2021, when it will take the fight to the new Rolls-Royce Ghost and the latest Bentley Flying Spur in the hyper-luxury limousine segment.

This new prototype has shed some camouflage compared with previous sightings, shining more light on the differentiation between it and the latest Mercedes S-Class.

Like the previous model the Maybach S-Class will exclusively be offered in long-wheelbase format, while over the regular S-Class it gains a redesigned radiator grille and a new front bumper, along with Maybach’s signature two-tone paint scheme cut at the saloon’s waistline.

The car’s LED headlights have also changed over the standard S-Class, along with the rear bumper, which features a unique diffuser and exhaust system. Finally, buyers will get a set of pop-out door handles.

Like our previous mule, this road-going test car features a series of black panels dotted around its nose and tail – suggesting the production model will receive an arsenal of new semi-autonomous driver assistance technologies.

The new S-Class introduces the latest version of Mercedes’ Drive Pilot technology. Completely autonomous parking and ‘level 3’ semi-autonomous driving with ‘hands-off’ capabilities arrives, though the system still faces legal approval before it means that the driver can rely on it on motorways, freeing up time to check emails and browse the web, while the car handles the task of driving. 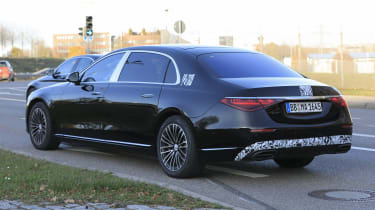 Inside, we’re expecting a comparable level of equipment to the standard S-Class. The same 12.3-inch digital instrument cluster and 12.8-inch infotainment system will feature, but they’ll be surrounded by plusher upholstery, deeper carpets, finer-quality trim and a couple of toys for rear-seat passengers, such as a wine cooler and a couple of extra touchscreens.

Like the previous-generation Maybach S-Class, this new model will likely only be available with Mercedes’s most powerful engines. A potential option is the brand’s twin-turbocharged 4.0-litre V8 unit, which generates 603bhp and 850Nm of torque.

However, Mercedes could easily also fit the Maybach with a plug-in hybrid powertrain. The company is already developing an AMG-tuned PHEV system for the standard S-Class – which, as the two cars are based on the same underpinnings, would slot neatly into the Maybach’s engine bay.

Mercedes is yet to confirm any details about the AMG S 73 e’s powertrain, but we expect it’ll be based on the brand’s 4.0-litre V8. Mercedes executives have also previously suggested that the finished system will generate more than 800bhp thanks to the electrical assistance  – and that it’ll have a maximum pure-electric range of more than 60 miles.

Prices for the new Mercedes-Maybach S-Class are yet to be confirmed – but, given the market in which the luxury saloon competes, we’re anticipating a starting price of £200,000 upwards.

What do you make of the new Mercedes Maybach S-Class? Let us know in the comments section below…

Check out the latest on the Mercedes S-Class’ upcoming rival, the new Maserati Quattroporte…