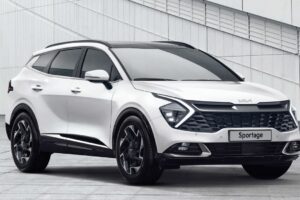 The new Kia Sportage will go on sale later in 2021, borrowing the bulk of its styling language from the all-electric EV6

The wraps have been pulled off the all-new fifth-generation Kia Sportage, which will go on sale towards the end of 2021. The Korean brand’s latest family SUV will hit the market with a bold new look and completely new interior loaded with new technology, providing a fresh challenge for the Volkswagen Tiguan and Peugeot 3008.

The brand will introduce a model designed specifically for the European market in September. So this first look is at the model in international market specification – the car we see later this year, destined for the UK, could look a little different.

The new Kia Sportage draws plenty of design inspiration from the all-electric EV6, sharing the same C-shaped daytime running lights and aggressive bonnet line up front, and a stylised version of the EV’s full-width light bar at the rear. Further similarities include an upswept waistline and triangular D-pillars. Kia’s trademark Tiger Nose radiator grille makes an appearance, being the largest interpretation of the design hallmark on any of the brand’s vehicles to date. Two tone paint will also appear for the first time on the Sportage. The brand has yet to share any exterior dimensions or boot capacity figures, so we’re unsure whether the new design is more spacious or practical than before.

Inside, Kia’s revisions for the Sportage are equally extensive. Like the EV6, there’s an enormous curved infotainment system set into the dashboard, which flows into a digital instrument cluster. Kia hasn’t yet confirmed any specs, but It’s likely to be the same setup found in the recently released Hyundai Tucson, making use of two 10.25-inch displays. The rest of the cabin is decorated with soft-touch switchgear and a range of handy storage bins. The centre console also has controls for the infotainment system, along with a shift-by-wire automatic gear selector.

Kia has also confirmed that it will launch a sporty new X-Line specification on the new Sportage. The sportier bodykit will include a new front bumper, lower side skirts and a curved roof rack, along with a choice of two unique upholstery finishes in either sage green or black. The cabin will also feature quilting and black metal wood trim.

Kia hasn’t confirmed any details about the next Sportage’s engine and drivetrains but, like the current model, it should share much of its mechanicals with the Hyundai Tucsn.

Should the next Sportage make use of the Tucson’s full engine line-up, a choice of front- and four-wheel drive will be available. Electrification will feature heavily throughout the range, too; the Hyundai’s line-up kicks off with petrol and diesel engines that include a 48-volt mild-hybrid set-up.

The system, which is already offered on some engines in the current Sportage range, harnesses braking energy when slowing down and charges a small battery. This then deploys its charge to reduce the load on the engine under acceleration. The MHEV tech will be paired with the group’s Intelligent Manual Transmission, a manual gearbox that features an electronically controlled clutch to allow for in-gear, engine-off coasting.

The next step up the hybrid range will be a more traditional petrol-electric combination. A 1.6-litre combustion engine will team up with a 59bhp electric motor, for a combined output of 227bhp and 350Nm of torque. The hybrid will allow for short distances to be covered in electric mode alone, with the batteries charged either when coasting, or from the engine itself.

A plug-in model will offer the greatest potential for low fuel bills, while low tax rates will be a big incentive for company car users. The same 1.6-litre petrol engine will likely feature, but with a larger-capacity battery and a more powerful electric motor that should return a zero-emissions range of around 30 miles.

If it follows in the steps of the Tucson completely, the Sportage could offer configurable suspension, thanks to the option of adaptive dampers. Also on the cards is a semi-autonomous driving system, allowing the Sportage to accelerate, brake and steer in lanes for short periods before needing intervention from the driver.

What will the new Kia Sportage have to beat? These are the best crossovers currently on sale…